One Henry Born; Another Henry Dies 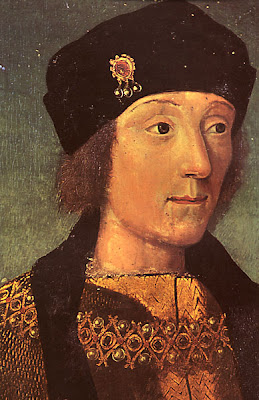 Henry VII was born on January 28, 1457 while Henry VIII died on January 28, 1547.
Henry Tudor, founder of the Tudor Dynasty, was the son of Edmund Tudor the First Earl of Richmond and Margaret Beaufort. His Lancastrian claim to the throne of England was through his mother who was the great granddaughter of John of Gaunt, the Duke of Lancaster. It was a rather tenuous claim, however, since it was maternal and based on a lineage of ancesters who had legitimized by Parliamentary act, since John's children by Kathryn Swynford were born before they were married. Through his father's ancestry, there was the link to Catherine of Valois through her marriage to Owen Tudor. His reputation, based on the joyous young reign of his second son, has been of a dour skinflint who just saved lots of money for that son to waste (per Hoskins). Henry VIII of course began that interpretation by executing his father's unpopular ministers, Empson and Dudley. Nevertheless Henry VII ended the Wars of the Roses, established the new dynasty, developed England's foreign policy; in doing so, he had to destroy any rivals to the throne through fair means or foul, curtail the power of the nobility, and institute unpopular taxes--except that England was ready for a stable central government and thus he succeeded in most of his efforts.
There is a new biography of Henry VII coming out soon: Winter King: Henry VII and the Dawn of Tudor England by Thomas Penn, published by Simon and Schuster:
It was 1501. England had been ravaged for decades by conspiracy, violence, murders, coups and countercoups. Through luck, guile and ruthlessness, Henry VII, the first of the Tudor kings, had clambered to the top of the heap—a fugitive with a flimsy claim to England’s throne. For many he remained a usurper, a false king.
But Henry had a crucial asset: his queen and their children, the living embodiment of his hoped-for dynasty. Queen Elizabeth was a member of the House of York. Henry himself was from the House of Lancaster, so between them they united the warring parties that had fought the bloody century-long Wars of the Roses. Now their older son, Arthur, was about to marry a Spanish princess. On a cold November day sixteen-year-old Catherine of Aragon arrived in London for a wedding that would mark a triumphal moment in Henry’s reign.
In this remarkable book, Thomas Penn re-creates the story of the tragic, magnetic Henry VII—a controlling, paranoid, avaricious monarch who was entering the most perilous years of his long reign.
Rich with drama and insight, Winter King is an astonishing story of pageantry, treachery, intrigue and incident—and the fraught, dangerous birth of Tudor England.
Here is an analysis of Henry VIII's legacy and last will and testament from a very popular Tudor blog. The reputation of Henry VIII as a ruler is so bound up in popular imagination with our desire to see people in the past and present be happy (that is, do whatever they want to do) that we sometimes forget Henry VIII's vocation and purpose in life was to be a good king, husband, and father. His sexual and marital life, a la The Tudors, perhaps prevents us from judging his actions in those three roles more objectively. From my point of view, for instance, citing the establishment of the Church of England as an accomplishment of his reign deserves a great deal of qualification. It was not based upon a theological reforming inspiration; it involved horrible destruction and loss of life; it required the establishment of an empire and a tyranny, and Henry VIII died wanting all the consolations of a traditional Catholic death: Masses and prayers, forgiveness and Heaven. By dividing England from the universal Catholic Church and the spiritual and moral authority of the Pope in Rome, Henry ensured that his bequests for spiritual assistance in the afterlife would never be fulfilled. Along the way, in addition to becoming a tyrant to his people, he proved himself a poor model of a husband (treating Katherine of Aragon cruelly and inhumanely and sentencing Anne Boleyn to a unjust death) and of a father (humiliating and threatening Mary; neglecting Elizabeth). As Rowan Williams, the Archbishop of Canterbury said a few years ago, if Henry VIII gained Heaven it was only through the prayers of one of the holy men he condemned to hideous death--because they opposed his break away from the universal Catholic Church and his claim on ecclesiastical supremacy in establishing the Ecclesiae Anglicanae. [And the fact that the Archbishop of Canterbury would even say such a thing, indicating a belief in salvation through works or even purgation after death, demonstrates again the confused legacy of Henry VIII's Church of England!]
It is also interesting to remember the words of Henry Peto, Observant Franciscan, who warned Henry VIII that dogs would lick his blood after his death, just like the bad King Ahab in the Old Testament: When Henry's body was being brought to Windsor Castle for burial, it rested overnight at the former Syon Abbey:

Syon Abbey had become renowned for its spiritual learning, public preaching and library. It was favoured and visited by King Henry VIII’s first wife, Catherine of Aragon but it got embroiled in the religious turmoil of the King’s divorce and his subsequent action of making himself Supreme Head of the Church in England. The Father Confessor, of the nuns, Richard Reynolds, could not accept the King’s supremacy and was brutally executed in 1535, his body placed on the abbey gateway. He was later canonised as a martyr.

In 1547, King Henry VIII's coffin was brought to Syon on its way to Windsor for burial. It burst open during the night and in the morning dogs were found licking up the remains! This was regarded as a divine judgement for the King's desecration of Syon Abbey.

And the fulfillment of Henry Peto's warning to Henry/Ahab about Anne/Jezebel! I'm sorry, I just don't agree that Henry VIII's establishment of the Church of England was an accomplishment worthy of unmitigated or unreserved praise.
Posted by Stephanie A. Mann at 2:16 AM