The Death of Katherine of Aragon 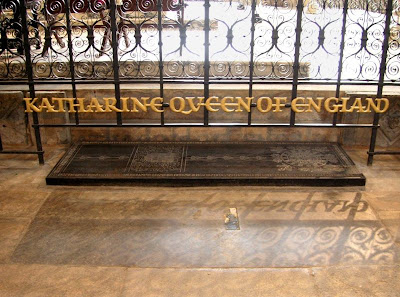 In the months before the death of Katherine of Aragon on January 7, 1536, both she and Mary her daughter had been very ill. They were both feeling the pressure of Henry VIII's anger and frustration with them because they were not cooperating with him. Cromwell told Mary that the very fact that she and Katherine of Aragon were alive was detrimental to Henry's relationships to foreign princes. She and Katherine were warned constantly against using the titles Princess or Queen for one another--the Princess Elizabeth and Queen Anne Boleyn owned those titles.

News of the executions of both John Fisher and Thomas More in June and July 1535 led mother and daughter to write to the Holy Father and the Holy Roman Emperor respectively, imploring them to do something about the religious changes Henry was making.

When Mary became so ill that Henry sent his own physician to care for her, Katherine begged him to send Mary to her, so she could care for her daughter--after all, they shared some of the same symptoms, sorrow and heartache. Henry refused.

When it became clear that Katherine was also very ill, perhaps near death, Katherine again begged him to let her see Mary one last time. Again, Henry refused.

Katherine died after speaking with Eustace Chapuys, Charles V's ambassador and delivering a heartfelt letter of love to her estranged husband. Henry and Anne responded by at first rejoicing at her death, wearing yellow, dining and dancing. He was relieved that the threat of war was lessened with her death.

Mary was not told of her mother's death until four days had passed. Katherine was buried in Peterborough Cathedral with a service befitting a Dowager Princess of Wales. Henry did not allow Mary to attend the funeral Mass either. Her tomb was upgraded with the marker "Katherine Queen of England" during the reign of George V.

May she rest in peace.

Peterborough Cathedral is planning its annual Katherine of Aragon Festival, to be held at the end of this month--more information here.
Posted by Stephanie A. Mann at 2:14 AM