Philip of Spain: King of England by Harry Kelsey 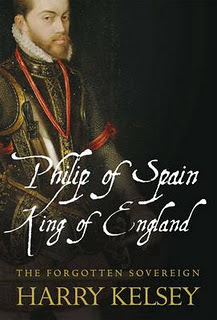 Mary Tudor, Renaissance Queen reviews a new book about Philip II of Spain and his role in England and has some reservations--here's the crucial part:

In 1570, some 12 years after Mary’s death, Philip claimed that he could give Pope Pius V ‘better information and advice on that kingdom [England], and on its affairs and people, than anyone else’.7 Clearly Philip believed he had not come away from the whole experience empty handed. His relationship with the English was at best complex but he took his role as King of England seriously and, as the quote suggests, believed himself to be an authority on that realm. This book has not proved to be a definitive or substantial account of Philip’s time as King of England. It covers briefly his involvement in the Marian Church and his influence over the direction of foreign policy, but there is no discussion of his improvements of the English navy (which of course backed fired on him in the end!), nor on his interest in another part of Mary’s realm – Ireland. It also suffers from a lack of discussion of recent works. As a result it seems distinct from current scholarship, in sharp contrast with John Edwards’ excellent Mary I: England’s Catholic Queen (New Haven and London: Yale University Press, 2011), which paid due consideration to Philip’s role, used an array of Spanish sources and up-to-date studies. As a result I would recommend Edwards’ biography of Mary over this book when it comes to the issue of Philip’s time as king-consort. More needs to be done though on the Habsburg who became England’s king. Popular knowledge of Philip’s later and troublesome relationship with the English and former sister-in-law Elizabeth I is well known. It is time to shed more light on the origins of that relationship, which was not as fruitless as the events of the 1580s would have us believe. (my emphasis)

I think I will trust this opinion and skip this book. (My husband will be SO relieved!)
Posted by Stephanie A. Mann at 2:19 AM

Email ThisBlogThis!Share to TwitterShare to FacebookShare to Pinterest
Labels: biographies, books, Mary I, Philip II of Spain, The Tudors