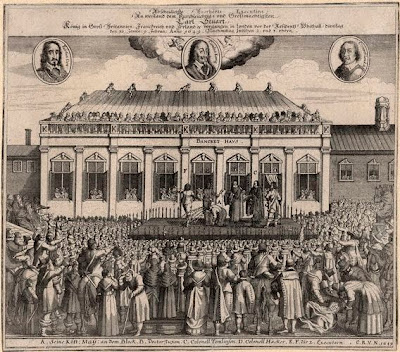 On January 30, 1649, King Charles I was executed in London outside the Banqueting House at Whitehall. Because of the cold, he wore two shirts so that he would not be seen to tremble, which could be interpreted as fear. I blogged about the start of his trial on January 20; this execution was the inevitable result. There are conflicting reports about crowd reaction to his beheading: one mentions a loud groan and people dipping their handkerchiefs in the blood at the scaffold as either relics or mementos. There is also some uncertainty about who the masked executioner was. Soon after his execution, the pamphlet Eikon Basilike (Royal Image) appeared, building up the image of Charles I as martyr for Anglicanism--John Milton wrote Eikonoklastes (The Iconoclast) as a Parliamentary reaction, attempting to destroy that image in popular imagination.
On January 30, 1661, the body of Oliver Cromwell was exhumed from its grave in Westminster Abbey and was posthumously executed by hanging, drawing and quartering as punishment for his crimes of treason and regicide. His body was left hanging at Tyburn and his head displayed outside Westminster Hall until 1685. Other regicides were either hunted or dug up, as the son exacted vengeance.
In London this morning, a service of commemoration is planned at the site of King Charles the Martyr's execution. According to the Society of King Charles the Martyr (SKCM):

Commemoration at the place of the Martyrdom
Noon High Mass with Sermon
Inside the Banqueting House, Whitehall
Celebrant: The Chaplain to SKCM
The Preacher: The Bishop of Richborough
Followed by Veneration of the Relic

When the 30th January falls on a Sunday it is customary to transfer the observance to the preceding Saturday.

The Society’s relics of S. Charles are placed upon the altar for the Mass and may be venerated and viewed after the service. A choir, usually from King’s College, London sings at the Mass. The Banqueting House is where S. Charles was kept for several hours on the day of his decollation. It is a magnificent setting for the Mass: the architect was Inigo Jones and the ceiling adorned by the great paintings of Rubens. There is an exhibition on the ground floor describing the events of 30th January 1649.

The Society is very grateful to the Royal Palaces Agency for their permission to hold the Mass. Access to the Banqueting House for the commemoration and Mass is free of charge. The costs of the service are considerable and donations gratefully received. SKCM also provides a bookstall after the Mass.

If you wish to attend, here are some travel notes. One of the SKCM's patrons is Lord Nicholas Windsor, who joined the Catholic Church in 2001 and then got married in the Vatican in 20006--he has thus lost his place in the succession (great-grandson of King George V, younger son of the Duke and Duchess of Kent, the latter of which became a Catholic in 1994 with Elizabeth II's approval.

Decollation. That's a fine Latinate term for beheading!
Posted by Stephanie A. Mann at 2:11 AM