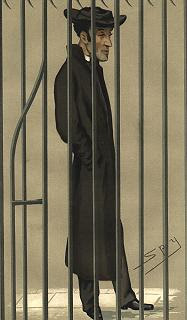 As John Shelton Reed's Glorious Battle: The Cultural Politics of Victorian Anglo-Catholicism recounts, the Anglo-Catholic ritualists who carried on the work of the Oxford Movement into local parishes and communities often faced tremendous conflict with the hierarchy of the Church of England. As the established church, it was able to use Parliament to pass laws forbidding certain ritualistic practices. The Public Worship Regulation Act of 1874, introduced in Parliament by the Archbishop of Canterbury Archibald Campbell Tait was supported by Queen Victoria and Prime Minister Benjamin Disraeli, and descried by William Gladstone, future Prime Minister . Among the ritualistic practices condemned by the Act: incense, lighted candles, genuflecting, mixed chalice (water added to the wine), ad orientatem position at the altar (facing East), and wearing vestments.

One Anglican clergyman who fell afoul of this Act was the Reverend Arthur Tooth, Vicar of St. James, Hatcham in South London. He rejected Parliament's authority to pass such an act without the concurrence of the Convocation of Bishops, but soon found himself arrested and imprisoned for such criminal acts -- he also wore a biretta and the choir sung the Agnus Dei! He was arrested on January 22, 1877 after protesting against the law, ignoring Court summons, and enduring riots and other disturbances at Sunday services.
He was only in gaol until February 17 but his health was broken down. He went abroad to recover and returned to find his church locked against him--but he found a way in through a window. Reverend Tooth soon had to retire his living at St. James and went to live in Woodside, Croydon, a borough of London where he continued his work with an orphanage for boys and an order of Anglican religious, the Sisterhood of the Holy Paraclete. He died on March 5, 1931.

In 1906, a Royal Commission on Ecclesiastical Discipline formally recognized diversity in worship throughout the Church of England but the law was not repealed until 1965.
Posted by Stephanie A. Mann at 2:05 AM