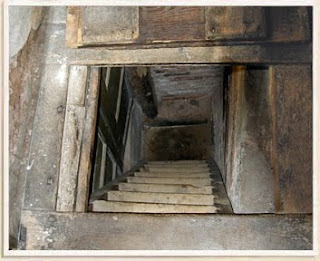 The blog Laudem Gloriae posted this very well illustrated examination of the construction of "priests holes" in Catholic households where priests, their altar vessels and other sacramentals could be be hidden if pursuivants came hunting:

Under the reign of "Good Queen Bess", a law was passed prohibiting the celebration of Mass, on pain of extradition. On a second offense, the guilty priest would be sentenced to a year in prison, and on the third offense, jailed for life. In some cases, the offending priest would be put to death, usually by hanging, drawing, and quartering. Another law was passed that punished with death any Catholic who should convert a Protestant.

It was during this time that the Jesuit and martyr Nicholas Owen was called on to design and build priest holes in all the great Catholic manses in England. He spent the greater part of his life doing so.

St. Nicholas Owen, a Jesuit lay brother, died under torture when James I's government, further investigating the background of the Gunpowder Plot, sought information about the various hiding places he had constructed:

The Jesuits were taken to London, and Owen was put into Marshalsea Prison before being moved to the Tower to be tortured. The king's men realized they had the only person who knew the location of the hiding places and residences of priests all over the kingdom. They were eager to force him to uncover the Catholic underground, but he was even more firm that he would not betray those whom he had spent so much time protecting. He was tortured on the rack for hours a day, several days in succession but maintained his silence. In frustration the torturers kept adding weight to his feet but went beyond all limits. On March 1 his abdomen burst open and his intestines spilled out. Owen lingered on for one painful day before dying in the early hours of March 2. The rack-master tried to cover his behavior, excessive even under the harsh standards of the day, by saying that the Jesuit had committed suicide. Clever and hard-working in his life, Nicholas Owen remained courageous and faithful in his death.
Posted by Stephanie A. Mann at 2:13 AM