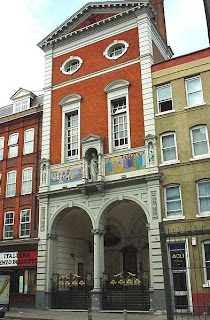 Today would be the memorial of St. Vincent Pallotti if t'were not Sunday (I once applied for a position with the Pallotines here in Wichita; the order was setting up an office of their Society of the Catholic Apostolate--I had to write a long essay in which I waxed eloquent, to no avail, on the correspondences between Newman's Oratory and Pallotti's Society), the nineteenth century founder of the Pallotines. He died on January 22, 1850 and was canonized in 1963 by Blessed Pope John XXIII. His London connection?--St. Peter's Italian Church on Clerkenwell Road. According to the parish website:

In the early 19th century the Saffron Hill area of London was a poor neighbourhood of densely populated slum-ridden alleys. By 1850, nearly 2000 Italian immigrants had settled there, chiefly employed as itinerant workers - street musicians, organ-grinders, street vendors or as artisans producing plaster figures, picture-frames, looking-glasses, barometers and other scientific instruments. They worshipped at the Royal Sardinian Chapel, Lincoln's Inn Fields, because they had no church of their own.

In 1845 St. Vincent Pallotti, a RC priest and founder of the S.A.C. (Pallottine Fathers), thought of constructing a church in London for Italian immigrants.
The Irish architect, Sir John Miller-Bryson, modelled the church on the Basilica of San Crisogono in Rome.

Originally it was meant to hold 3,400 people, but the plans were scaled down. It was consecrated as "The Church of St. Peter of all Nations" on 16 April 1863 and, at that time, it was the only church in Britain in the Roman Basilica style.

St Vincent Pallotti, the priest asked by Cardinal Wiseman to establish St Peter's, was born in Rome in 1795. His parents Pietro Paolo and Magdalena were the decisive religious influence during his youth. He was ordained priest on the 16th of May 1818. After his ordination, he committed himself to keep alive the Christian faith of the people of Rome. His pastoral presence on all fronts urged him on to become an animator of collaboration among clergy, religious and laity. He held very strongly a belief in the then new concept that every Christian, not just those in the holy orders, has from Jesus a mission for the Church and for the world.

To put this concept into action he founded in 1835 the Union of Catholic Apostolate. This movement brought together priests, monks, nuns and lay people as a community for the common purpose of living and spreading awareness of the Good News to all of the world.

St. Vincent died on the 22nd of January 1850 at the centre of his new community, the church of San Salvatore in Onda, Rome. He was beatified by Pope Pius XII on 22 January 1950, and proclaimed a Saint by Pope John XXIII in January 1963.
Posted by Stephanie A. Mann at 2:18 AM