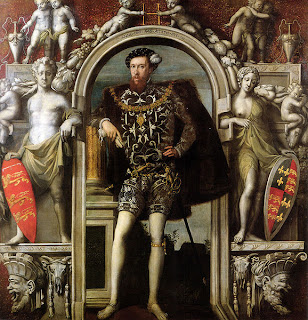 The Earl's father, Thomas Howard, the Third Duke of Norfolk survived just because Henry VIII died before signing the final order for execution. The Earl was executed on January 19, 1547 because Henry VIII feared that he wanted to usurp the throne from Edward, the Duke of Cornwall and Prince of Wales. According to this site:

When Henry VIII's health was failing in 1546, Surrey made the mistake of announcing his opinion of the obviousness of his father becoming Protector to young Prince Edward. The Seymours finally had their day, when Surrey ill-advisedly displayed royal quarterings on his shield. Arrested along with his father on charges of treason, he was imprisoned in the Tower. Several additional claims were made against him, including that he was secretly a papist. Surrey was indicted of high treason in January 1547, despite the lack of any real evidence, condemned, and executed on January 19, 1547 on Tower Hill.

Although the Howard family had been so loyal to the first two Tudor kings, conflict between the Seymour family, especially the brothers of Jane Seymour, the Queen who finally fulfilled Henry VIII's hopes for a male heir, and the Howard family meant trouble for both Thomas and Henry Howard. The Seymours tried to spread rumours that the Howards were opposed to the Dissolution of the Monasteries (although they benefitted from it) and supported the Pilgrimage of Grace (although they fought against it). Henry Howard even spent some timed imprisoned at Windsor Castle after striking a courtier who repeated the slander. Therefore, he wrote a poem contrasting his time in prison to the time he spent there with Henry Fitzroy:

PRISONED IN WINDSOR, HE RECOUNTETH
HIS PLEASURE THERE PASSED.

SO cruel prison how could betide, alas,
As proud Windsor, where I in lust and joy,
With a Kinges son, my childish years did pass,
In greater feast than Priam's sons of Troy.
Where each sweet place returns a taste full sour.
The large green courts, where we were wont to hove,
With eyes cast up into the Maiden's tower,
And easy sighs, such as folk draw in love.
The stately seats, the ladies bright of hue.
The dances short, long tales of great delight;
With words and looks, that tigers could but rue;
Where each of us did plead the other's right.
The palme-play, where, despoiled for the game,
With dazed eyes oft we by gleams of love
Have miss'd the ball, and got sight of our dame,
To bait her eyes, which kept the leads above.
The gravel'd ground, with sleeves tied on the helm,
On foaming horse, with swords and friendly hearts;
With chere, as though one should another whelm,
Where we have fought, and chased oft with darts.
With silver drops the mead yet spread for ruth,
In active games of nimbleness and strength,
Where we did strain, trained with swarms of youth,
Our tender limbs, that yet shot up in length.
The secret groves, which oft we made resound
Of pleasant plaint, and of our ladies' praise;
Recording oft what grace each one had found,
What hope of speed, what dread of long delays.
The wild forest, the clothed holts with green;
With reins availed, and swift y-breathed horse,
With cry of hounds, and merry blasts between,
Where we did chase the fearful hart of force.
The void vales eke, that harbour'd us each night:
Wherewith, alas ! reviveth in my breast
The sweet accord, such sleeps as yet delight;
The pleasant dreams, the quiet bed of rest;
The secret thoughts, imparted with such trust;
The wanton talk, the divers change of play;
The friendship sworn, each promise kept so just,
Wherewith we past the winter night away.
And with this thought the blood forsakes the face;
The tears berain my cheeks of deadly hue:
The which, as soon as sobbing sighs, alas!
Up-supped have, thus I my plaint renew:
'O place of bliss! renewer of my woes!
Give me account, where is my noble fere?
Whom in thy walls thou d[id]st each night enclose;
To other lief; but unto me most dear.'
Echo, alas! that doth my sorrow rue,
Returns thereto a hollow sound of plaint.
Thus I alone, where all my freedom grew,
In prison pine, with bondage and restraint:
And with remembrance of the greater grief,
To banish the less, I find my chief relief.

Along with Sir Thomas Wyatt, Howard was the great developer of the sonnet form in English, and he even wrote a sonnet on the death of his fellow poet:

OF THE DEATH OF SIR THOMAS WYATT.

DIVERS thy death do diversely bemoan :
Some, that in presence of thy livelihed
Lurked, whose breasts envy with hate had swoln,
Yield Cæsar's tears upon Pompeius' head.
Some, that watched with the murd'rer's knife,
With eager thirst to drink thy guiltless blood,
Whose practice brake by happy end of life,
With envious tears to hear thy fame so good.
But I, that knew what harbour'd in that head ;
What virtues rare were tempered in that breast ;
Honour the place that such a jewel bred,
And kiss the ground whereas the corpse doth rest ;
With vapour'd eyes : from whence such streams availe,
As Pyramus did on Thisbe's breast bewail.

Robert Hutchinson traces the career of the Howard family in House of Treason: The Rise and Fall of a Tudor Dynastyand describes the situation at Court in The Last Days of Henry VIII: Conspiracy, Treason and Heresy at the Court of the Dying Tyrant.
Posted by Stephanie A. Mann at 2:15 AM