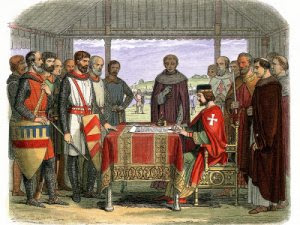 The recent decision from The Supreme Court of the United States of American reversing a Sixth Circuit Court decision was written by Chief Justice Roberts. He cites the history of religious conflict in England from King John and the Magna Carta to Henry VIII and the Act of Supremacy--and beyond, to the colonies of "New England":

Controversy between church and state over religious offices is hardly new. In 1215, the issue was addressed in the very first clause of Magna Carta. There, King John agreed that “the English church shall be free, and shall have its rights undiminished and its liberties unimpaired.” The King in particular accepted the “freedom of elections,”a right “thought to be of the greatest necessity and importance to the English church.” J. Holt, Magna Carta App. IV, p. 317, cl. 1 (1965).

That freedom in many cases may have been more theoretical than real. See, e.g., W. Warren, Henry II 312(1973) (recounting the writ sent by Henry II to the electorsof a bishopric in Winchester, stating: “I order you to hold a free election, but forbid you to elect anyone but Richard my clerk”). In any event, it did not survive the reign of Henry VIII, even in theory. The Act of Supremacy of 1534, 26 Hen. 8, ch. 1, made the English monarch the supreme head of the Church, and the Act in Restraint of Annates, 25 Hen. 8, ch. 20, passed that same year, gave him the authority to appoint the Church’s high officials. See G. Elton, The Tudor Constitution: Documents and Commentary 331–332 (1960). Various Acts of Uniformity, enacted subsequently, tightened further the government’s grip onthe exercise of religion. See, e.g., Act of Uniformity, 1559,1 Eliz., ch. 2; Act of Uniformity, 1549, 2 & 3 Edw. 6, ch. 1. The Uniformity Act of 1662, for instance, limited service as a minister to those who formally assented to prescribed tenets and pledged to follow the mode of worship set forth in the Book of Common Prayer. Any minister who refusedto make that pledge was “deprived of all his Spiritual Promotions.” Act of Uniformity, 1662, 14 Car. 2, ch. 4.

Seeking to escape the control of the national church, the Puritans fled to New England, where they hoped to elect their own ministers and establish their own modes of worship. See T. Curry, The First Freedoms: Church and State in America to the Passage of the First Amendment 3 (1986); McConnell, The Origins and Historical Understanding of Free Exercise of Religion, 103 Harv. L. Rev.1409, 1422 (1990). William Penn, the Quaker proprietor of what would eventually become Pennsylvania and Delaware, also sought independence from the Church of England. The charter creating the province of Pennsylvania contained no clause establishing a religion. See S. Cobb, The Rise of Religious Liberty in America 440–441 (1970).

Colonists in the South, in contrast, brought the Church of England with them. But even they sometimes chafed at the control exercised by the Crown and its representatives over religious offices. In Virginia, for example, the law vested the governor with the power to induct ministers presented to him by parish vestries, 2 Hening’s Statutes at Large 46 (1642), but the vestries often refused to make such presentations and instead chose ministers on their own. See H. Eckenrode, Separation of Church and State in Virginia 13–19 (1910). Controversies over the selection of ministers also arose in other Colonies with Anglican establishments, including North Carolina. See C. Antieau, A. Downey, & E. Roberts, Freedom from Federal Establishment: Formation and Early History of the First Amendment Religion Clauses 10–11 (1964). There, the royal governor insisted that the right of presentation lay with the Bishop of London, but the colonial assembly enacted laws placing that right in the vestries. Authorities in England intervened, repealing those laws as inconsistent with the rights of the Crown. See id., at 11; Weeks, Church and State in North Carolina, Johns Hopkins U. Studies in Hist. & Pol. Sci., 11th Ser., Nos. 5–6, pp. 29–36 (1893).

It was against this background that the First Amendment was adopted. Familiar with life under the established Church of England, the founding generation sought to foreclose the possibility of a national church. See 1 Annals of Cong. 730–731 (1789) (noting that the Establishment Clause addressed the fear that “one sect might obtain a pre-eminence, or two combine together, and establish a religion to which they would compel others to conform” (remarks of J. Madison)). . . .

Chief Justice Roberts goes on to cite a proof text of the government's non-interference in the naming of church ministers, in connection with the Catholic Church and the firt Archbishop of Baltimore, John Carroll:

The first [example] occurred in 1806, when John Carroll, the first Catholic bishop in the United States, solicited the Executive’s opinion on who should be appointed to direct the affairs of the Catholic Church in the territory newly acquired by the Louisiana Purchase. After consulting with President Jefferson, then-Secretary of State Madison responded that the selection of church “functionaries” was an “entirely ecclesiastical” matter left to the Church’s own judgment. Letter from James Madison to Bishop Carroll (Nov. 20, 1806), reprinted in 20 Records of the American Catholic Historical Society 63 (1909). The “scrupulous policy of the Constitution in guarding against a political interference with religious affairs,” Madison explained, prevented the Government from rendering an opinion on the “selection of ecclesiastical individuals.” Id., at 63–64.
It is interesting that Roberts does not cite Maryland and the Lords Baltimore in the paragraph on the Puritans and the Quakers.
Posted by Stephanie A. Mann at 2:10 AM