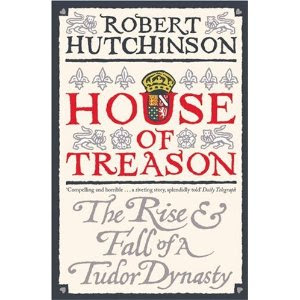 Robert Hutchinson's House of Treason: The Rise and Fall of a Tudor Dynasty tells the story of the Howard family. The synopsis from Orion Publishing certainly uses some salacious key words:

The Howard family - the Dukes of Norfolk - were the wealthiest and most powerful aristocrats in Tudor England, regarding themselves as the true power behind the throne. They were certainly extraordinarily influential, with two Howard women marrying Henry VIII - Anne Boleyn and the fifteen-year-old Catherine Howard. But in the treacherous world of the Tudor court no faction could afford to rest on its laurels. The Howards consolidated their power with an awesome web of schemes and conspiracies but even they could not always hold their enemies at bay. This was a family whose history is marked by treason, beheadings and incarceration - a dynasty whose pride and ambition secured only their downfall.
Sex, greed and treachery at the heart of a Tudor regime.

Isn't it interesting that the sanctity of Philip Howard isn't included in the promotional blurb? Hutchinson describes his journey from proud noble to humble Christian very effectively, but the publisher leaves that out?

Sex, greed, sacrificial holiness, and treachery at the heart of a Tudor regime.

As the synopsis accurately states, the Howard family was certainly one of the most important noble families in England, but Hutchinson aptly describes the difficulty of staying on the right side of any of the Tudor monarchs. The Howard family definitely started out at a great disadvantage, since they had fought for Richard III! The factions at the Tudor Court and the desire for power, influence, and wealth are the sources of the drama involved, especially during the reign of Henry VIII, as Thomas Howard struggled against first Wolsey and then Cromwell for years and then the Seymour family at the end of his life to influence the king and maintain his favor. Even after his first two great rivals had fallen, Howard and his son found themselves out of favor and sentenced to death under Henry VIII's elastic definition of treason. Henry Howard, the Earl of Surrey was executed, but his father survived simply because Henry VIII died before signing the death warrant.

Surrey's son also ventures too near the throne, dealing with Mary of Scotland and threatening Elizabeth's shaky hold on power; he is also executed. In the next generation, Philip Howard endures imprisonment and death when he returns to the Catholic Church after hearing Edmund Campion speak. The next generation holds on, in spite of one Howard's suspected Catholicism, during Elizabeth I's reign and the Howard family is secure, for a time, when James VI of Scotland comes to the throne.

The book (I have the paperback edition) is wonderfully documented, with two sets of color plates, a family tree, a chronology, list of dramatis personae, list of the Howard family homes, notes, a bibliography and an excellent index.

Highly recommended for easy scholarship and readability.
Posted by Stephanie A. Mann at 2:01 AM