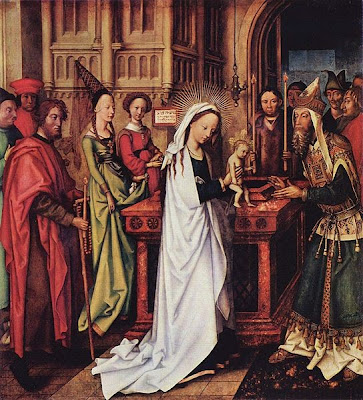 Down with the rosemary, and so
Down with the bays and misletoe;
Down with the holly, ivy, all
Wherewith ye dress'd the Christmas hall;
That so the superstitious find
No one least branch there left behind;
For look, how many leaves there be
Neglected there, maids, trust to me,
So many goblins you shall see. --Robert Herrick, Ceremony on Candlemas Eve
************
Kindle the Christmas brand, and then
Till sunset let it burn ;
Which quench'd, then lay it up again
Till Christmas next return.
Part must be kept wherewith to tend
The Christmas log next year,
And where 'tis safely kept, the fiend
Can do no mischief there.--Robert Herrick, Ceremony on Candlemas Day

February 2, Candlemas, was the day for taking down all the Christmas decorations, the 40th day after Christmas. The Yule Log was also lit and allowed to burn almost away, with some kept to start the next Yule Log.

Liturgically, February 2 is the day of Purification of the Blessed Virgin Mary or the Presentation of Christ in the Temple. The Gospel is taken from St. Luke, depicting the ritual offering and the encounters with the priest Simeon and the prophetess Anna. Candles for use at church or in the home for prayer were blessed on Candlemas. More here. And here is a link to the text of St. Robert Southwell's poem on the Presentation.

Another event to mark on February 2nd--Blessed John Henry Newman established the first Oratory of St. Philip Neri in England on that date in 1848. The Birmingham Oratory is celebrating its 164th anniversary today! As I recall from when Father Dennis Corrado from the Brooklyn Oratory visited Newman University last century, Newman's selection of the Congregation of the Oratory after his conversion and training in Rome for the priesthood was led by how similar Oratorian community life was to the life he loved in Oxford at Oriel and at the College in Littlemore. It afforded him the opportunity to work in education and with the laity. Father Corrado recommended Placid Murray's Newman the Oratorian which I then dutifully read: the author emphasized the true development and continuity of Newman's ministry, spirituality, preaching, and teaching in the Oratory and the Catholic Church from his days at the University of Oxford and in the Church of England. Happy anniversary!
Posted by Stephanie A. Mann at 2:10 AM