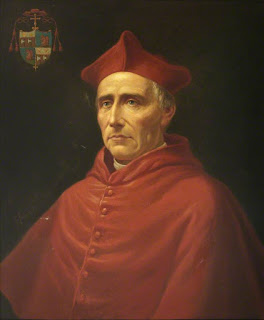 According to the Catholic Encyclopedia, Christopher Cardinal Bainbridge, Henry VIII's man in Rome and Thomas Wolsey's predecessor in the Archdiocese of York, died on this date in 1514:
Archbishop of York, and Cardinal, b. at Hilton, near Appleby, in Westmoreland, probably 1464; d. at Rome, 14 July, 1514. He proceeded to Oxford, entering Queen's College, of which he became provost in or before 1495, being about that time admitted LL.D.; he became later a liberal benefactor to his college. He held a number of benefices, including the treasurership of the Diocese of London, on Henry VII's presentation, and Master of the Rolls, a post he held till his elevation to the See of Durham, which took place in 1507, nominated thereto by the king, who restored the temporalities of the see to him. He was consecrated on 12 December. This see he held but a short while, being translated to York the next year by a papal Bull dated 20 September, 1508. In 1509 he was sent by Henry VIII as his ambassador to Rome. Julius II created him a cardinal on 10 March, 1511, giving him the title of St. Praxedis, in reward for negotiating Henry's adherence to the pope as against France, for which country he felt a strong antipathy all his life. As cardinal he was commissioned by Julius to lead a military expedition against Ferrara, which he successfully besieged. He endeavoured to secure from Pope Leo X the bestowal on Henry of the title of "Most Christian King" which Louis of France had forfeited by waging war against the pope; but the peace of 1514 made this project abortive. Bainbridge was poisoned by an Italian priest named Rinaldo de Modena, who acted as his steward or bursar, in revenge for a blow which the cardinal, a man of violent temper, had given him. It was hinted that the crime was perpetrated at the instigation of Silvestri de Gigli, Bishop of Worcester, the resident English ambassador at Rome, but de Giglis exonerated himself. Bainbridge was buried in the English Hospice, now known as the English College, Rome. He was a stout upholder of Henry's interests at the Curia.
According to the blog of the Archives of the Venerable English College in Rome:
Bainbridge had other responsibilities. Most notably, for our purposes, he acted as Warden of the English Hospice from 1510, though his trusty secretaries William Burbanke and Richard Pace (c.1483–1536) did much of the day-to-day work. He served in the Roman Rota, the papal court of appeal, and in 1513 became Cardinal Protector of the Cistercian Order.
Dr. Nicholas Schofield offers some insights into the circumstances of his death:
Accounts differ as to the motivation of this crime: some say that Rinaldo was seeking revenge after the cardinal had struck him during an argument, others that he was hired by Gigli. Such rivals had much to gain from the cardinal’s demise: Gigli replaced him as Warden of the Hospice and Wolsey as Cardinal Archbishop of York.

Bainbridge’s Requiem was celebrated in the Hospice chapel, where he was buried; initially his splendid tomb was placed before the High Altar before being moved to the side. It has experienced the ravages of time – when Nicholas Wiseman first saw the chapel in 1818, he described the richly effigied tomb as ‘shattered and defaced’. Its presence takes us back to the days of the Hospice, when the Catholic King of England sent a prelate as his Ambassador to Rome.
The Hospice was ransacked during Charles V's siege of Rome and after Henry VIII's break from Rome was no longer the English Hospice at all. As the VEC History explains:
By the time of the Reformation, the Hospice was badly run and in decline. Church authorities decided to turn it into a seminary. The first six students came from Douai in 1577 and attended lectures at the Jesuit-run Collegio Romano, precursor of the Gregorian University. The following year all the students signed the Missionary Oath in the Liber Ruber, the historic book which to this day records the names and details of every student in the College. The first to sign was St Ralph Sherwin, who swore to return to England “hodie quam cras” (today rather than tomorrow). Pope Gregory XIII issued the bull of foundation of the English College on 1 May 1579, celebrated as Founders’ Day. But the new College got off to a shaky start with acerbic disputes between students and the College authorities which were in time resolved.
Bainbridge’s story also reminds us of a time when Italian priests served as bishops for England. Silvestri de Gigli succeeded his uncle Giovanni de Gigli as Bishop of Worcester in 1498; when Silvestri died in 1521, Girolamo De Ghinucci succeeded him in 1522 and was deprived of his bishopric in 1535 by Henry VIII. For a time, the future Pope Clement VII (Giulio di Giuliano de' Medici) served as apostolic administrator between Gigli and Ghinucci. Hugh Latimer replaced Ghinucci as Henry VIII's choice.
Image Credit (public domain): a 19th century portrait of Bainbridge by  G. Francisi.
Posted by Stephanie A. Mann at 12:00 AM