Preview: One of 29 Venerable English Martyrs on the Son Rise Morning Show 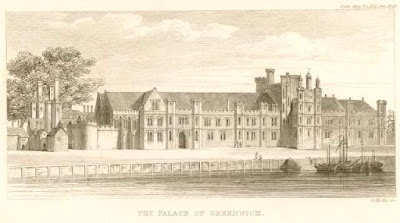 In 1886, Pope Leo XIII beatified 54 martyrs, including Thomas More and Bishop John Fisher, later canonized in 1935, and 11 others who were canonized in 1970 by Pope Paul VI; he also declared 29 English Catholic martyrs to be Venerable (several of these martyrs had died in chains, that is, is prison or because of their treatment in prison). These Venerable Martyrs were not included among those beatified in 1895, 1929, or 1987.

The stages of a Cause for Canonization in the Catholic Church are indicated by the title granted the proposed saint along the way: 1) Servant of God; 2) Venerable; 3) Blessed; and 4) Saint. For example, Archbishop Sheen is still at the Venerable, although the miracle needed for his Beatification was approved a couple of years ago; Chaplain Emil Kapaun of my home diocese is a Servant of God.

On Monday, July 19, I'll tell the story of one of these martyrs, the Observant Franciscan, Venerable Anthony Brookby, on the Son Rise Morning Show--at my usual time, 6:50 a.m. Central/7:50 a.m. Eastern. Please listen live here on EWTN Radio's website or on your local EWTN radio affiliate.

Venerable Anthony Brookby was strangled to death, secretly in prison, 484 years ago on July 19, 1537 after enduring horrible torture in Newgate Prison. He had been Professor of Divinity at Magdalen College, Oxford, teaching theology and well-versed in Latin, Greek and Hebrew (signs that he was a Christian humanist in the mold of Bishop John Fisher, Erasmus, More and others). So how did he end up a martyr? Because he, like others in his house, opposed Henry VIII's actions in the King's Great Matter--and he remonstrated with Henry publicly in his sermons.

The Observant Franciscans had one of their friaries next door to the Tudor palace on the Thames, the Palace of Placentia, also known as Greenwich Palace (pictured above), now the location of the Royal Navy College and the Greenwich Observatory (up the hill!) Their chapel served almost as the Royal parish although there was a chapel in the palace, some ruins of which were discovered in 2005:
The friars' church was used for royal baptisms and marriages. Henry VIII was christened probably in this church (1491), and certainly his brother Edmund (1498). The marriage of Henry and Catherine took place at Greenwich, probably in the friars' church (1509). The Princess Mary was christened here 20 February, 1515-16, and the Princess Elizabeth 8 September, 1533.
Henry VIII admired the Observant Friars at Greenwich as much as he admired Bishop John Fisher (which we know didn't mean much once Henry had a certain goal in mind!):

Henry VIII, in 1513, wrote from his palace of Greenwich to Leo X that he could not sufficiently commend the Observant Friars' strict adherence to poverty, their sincerity, charity and devotion. No Order battled more assiduously against vice, and none were more active in keeping Christ's fold.
Remember that it was Pope Leo X who named Henry VIII "Defender of the Faith" in 1521 after the king wrote his book defending the Seven Sacraments of the Catholic Church against Martin Luther's teachings.
When the validity of Henry VIII's marriage to Catherine of Aragon first became an issue, the Observant Franciscans were all on her side, that is, convinced that their Sacramental Marriage was valid and the papal dispensation issued by Pope Julius II in 1503 proved it. One of the friars even preached against the king's desire to have that marriage declared null in Henry's--and Anne Boleyn's--presence at Greenwich in 1532 (on Easter Sunday)!
Therefore, Henry VIII really wanted to force the Observant Friars to accept his new queen and title as Supreme Head and Governor of the Church in England in 1534:
On 15 June the visitors tried to induce the Greenwich friars to adopt the same procedure [to entrust the decision for all the friars to the decision of a few friars], 'specially to the intent that if the discreets should refuse to consent, it were better after our minds to strain a few than a multitude.' The friars, however, 'stiffly affirmed that where the matter concerned particularly every one of their souls, they would answer particularly every man for himself.' After further discussion, the visitors were compelled to examine each friar separately, and each refused to accept the articles, especially that which denied the papal authority. In answer to all the arguments of the visitors they declared that 'they had professed St. Francis' religion, and in the observance thereof they would live and die.'
Reaction was swift to that refusal:
On 17 June two cart-loads of friars drove through London to the Tower, (fn. 52) and it is possible that some of the Greenwich Observants were among them. On or before 11 August the friars were expelled from their convent (fn. 53) (though they seem to have made some kind of submission (fn. 54) ) and distributed in different places, generally in houses of the Grey Friars, where, wrote Chapuys to Charles V, 'they were locked up in chains and treated worse than they could be in prison.' (fn. 55) Some, such as John Forest, were actually in prison in London. (fn. 56) Two of them, inclosed in a poor lodging at the Grey Friars, Stamford, and treated as prisoners, were ' in meetly good case as the world at this time requireth,' and sent to London for their little belongings, including a new Psalter, a pair of socks, a penner and inkhorn. (fn. 57) But the severity of their treatment is shown by the fact that out of 140 Observant Friars thirty-one soon died, (fn. 58) and this does not account for all the deaths. Thomas Bourchier, who was a member of the Greenwich friary in the reign of Mary, gives details of several martyrdoms which probably belong to this time, though the writer assigns them to 1537. (fn. 59) On 19 July Anthony Brdrbe [Brookby], formerly of Magdalen College, Oxford, a distinguished scholar, who had been imprisoned and tortured to such an extent that ' for twenty-five days he could not turn in bed or lift his hands to his mouth,' was strangled with his own cord. (fn. 60) On 27 July Thomas Cortt, who had been imprisoned for a sermon against the king in the church of St. Lawrence, London, died in Newgate. (fn. 61) On 3 August Thomas Belchiam, a young priest, who had composed a book against the king, one copy of which he left in the hands of his brethren at Greenwich, died of starvation in Newgate. (fn. 62) No mention of these three friars occurs in extant contemporary authorities, but Bourchier's account representing the tradition of the Order is probably substantially correct, though the names may be misspelt.
The secrecy of their imprisonment, torture, and deaths reminds me of the sufferings several of the Carthusians endured, harassed for a time and then imprisoned and left to die of dehydration and starvation.
Venerable Anthony Brookby and others among the Observant Franciscans suffered and died because, as Henry VIII himself had said, they were "active in keeping Christ's fold", urging him not to divide the Church and set himself up as the Caesar-Pope of England and calling on him to repent and return to the Church and his marriage to Catherine of Aragon. They were bold and brave!
Venerable Anthony Brookby, pray for us!
Image Credit (public domain): A sketch of Greenwich Palace, published in The Gentleman's Magazine in 1840 (earlier published by W. Bristow in 1797)
Posted by Stephanie A. Mann at 12:00 AM