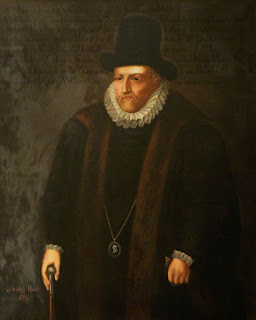 I found this article, by Dr. Neil Younger, Lecturer in History at the Open University, most fascinating for the questions he raises about Queen Elizabeth I's regime and the officials she consulted with throughout her reign. "How Protestant was the Elizabethan Regime?" was published in The English Historical Review, Volume 133, Issue 564, October 2018, pages 1060–1092, and is available now (free) for download as a .pdf:Recent historiography on the Elizabethan regime has argued that it was strongly dominated by convinced Protestants, most prominently Lord Burghley, the earl of Leicester and Sir Francis Walsingham. This article argues that this consensus glosses over many important political figures whose religion was much more conservative, who were often sympathetic to Catholics and in several cases were probably essentially Catholic themselves. These individuals, although prominent at the time, have been seriously neglected by historians, often because of the nature of the archival record. The article surveys the prominence of such men throughout the reign, examining their religious inclinations. It goes on to assess the extent of their influence on the politics of the period, arguing that they were capable of mounting major political initiatives, and indeed scored several important successes against more strongly Protestant policies. Likewise, it argues that very often forward Protestant policies met with failure, in which the conservatives’ influence can often be detected. Finally, it discusses some of the consequences of these findings, proposing a more complex picture of Elizabethan politics, in which religious division and indeed conflict was a significant factor, and arguing that the Elizabethan regime should therefore be seen as a much less united and univocal entity than is often assumed.
Younger describes the accepted historiography of Queen Elizabeth's council and councilors, identifies the Catholic and Protestant factions throughout her reign, their major issues and projects, whether they succeeded or failed, and provides examples of those Elizabeth kept at her Court in spite of their Catholic associations.
For instance, he points out that Sir John Fortescue, pictured above, was "a fixture at court throughout the reign. . . . He was the son of Sir Adrian Fortescue, executed in 1539 and regarded as a Catholic martyr, and the stepson of Thomas Parry. Sir John conformed, but Catholicism remained strong within his family. His brother Anthony was convicted of high treason for engaging in Catholic conspiracies against Elizabeth, and later went into exile. John Fortescue sent his sons to the strongly Catholic-leaning Gloucester Hall, Oxford; one of them, Francis, ‘declared himself a Catholic’, sheltered a Jesuit at his house and had links with the Gunpowder plotters. Two of Sir John’s grand-daughters became nuns in the Spanish Netherlands."
Younger points out some even more interesting connections to Catholic priests, Catholic plots and plotters in the life and career of Sir Christopher Hatton, Elizabeth I's "mouton"!
I appreciated the narrative and the distinctions Younger makes throughout the article. But the most intriguing question comes near the end:
There are also a number of important broader consequences relating to the religious climate within England as a whole. If there were defenders (or non-persecutors) of Catholics at the highest level, this changes our picture of the condition of English Catholicism. The tendency has sometimes been to see Catholics as powerless victims of the regime, yet their ability to call upon support from privy councillors and other powerful people qualifies this. We can see Catholics or their representatives as political actors, not merely as oppositional commentators or hapless victims of state oppression. Such a reframing also contributes towards a more sophisticated analysis of the important and neglected question of how and why it was that some Catholics suffered terribly under Elizabeth, while others survived and prospered.
Why indeed? Is it just a matter of the degree to which some Catholics compromised? or some Catholics refused to compromise? Was it the service they provided and their personal demonstrations of loyalty to the Queen that made the difference? These are good questions.
If you are interested in the article, I encourage you to access it and download it as soon as possible--who knows when it will go behind the paywall!
Posted by Stephanie A. Mann at 12:00 AM