A Church Papist's Hidden Catholic Chapel? and Drops of Blood and Water 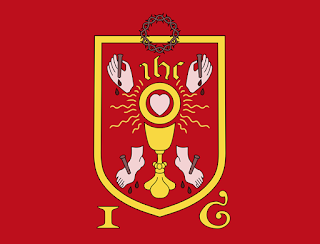 Author Francis Young posts on his blog a link to an article he co-authored with Brigitte Webster in The Catholic Herald (and the link seems to work now/not behind a pay-wall):This month’s Catholic Herald contains an article by me and Brigitte Webster, the owner of Old Hall in Barnham Broom, Norfolk, about a 16th-century domestic chapel discovered inside the house earlier this century, but whose significance has only recently been realised. The chapel (which may date from the 1570s) features a distinctive pattern of black and white drops representing the blood and water that flowed from Christ’s side, as well as an aumbry and the probable remains of a piscina. The decorative scheme quite closely resembles a well-known chapel at Harvington Hall in Worcestershire. Since the Chamberlain family who lived at Barnham Broom were never recorded as recusants, it is likely this is some of the first evidence of a domestic oratory used for Catholic worship by a family of church papists. If true, this is confirmation of the case advanced by Alexandra Walsham and other historians that church papists were every bit as committed to Catholicism and to their Catholic identity as recusants; church papists simply chose to express their Catholicism in a different way.
Church Papists outwardly conformed to avoid the fines for not attending Church of England services and the harassment and other penalties of being Catholic in Protestant England. Young is suggesting that this hidden chapel is evidence of their efforts to remain faithfully Catholic. The connection of the decoration of the chapel with the "distinctive pattern of black and white drops representing the blood and water that flowed from Christ’s side" and that same decoration in the secret chapel at Harvington Hall is important, since the latter was the home of known recusants, who paid the fines and suffered the inconveniences of their faith.
In the article, Young and Webster make it clear that even being a Church Papist during Elizabeth I's reign was dangerous:
Because we usually have no evidence of legal proceedings against church papists (for the obvious reason that they stayed under the radar of the authorities), we have very little evidence for who these people were. However, in the 1560s and ’70s the gentry of East Anglia were notoriously sympathetic to Catholicism and both recusancy and church papistry were rife – so much so that, in 1578, Elizabeth came on progress to Norfolk and Suffolk as part of a crackdown on Catholics. The Queen deliberately visited Catholics, singled them out, humiliated them and arranged their trial and imprisonment.
Catholicism in East Anglia was never quite the same after the royal progress of 1578, which stamped out the widespread and semi-public crypto-Catholicism of earlier years and confined Catholicism to a core of the most committed families, such as the Bedingfields of Oxburgh. We cannot know whether the celebration of Mass in the secret chapel at Barnham Broom Old Hall survived this crackdown or not, but the chapel transports us back to a murky world where it was eminently possible for those who remained Catholic at heart to attend Protestant services in the parish church while also hearing Mass in private – sometimes celebrated by the same parish priest.
Here's a perfect example of how Elizabeth I "deliberately visited Catholics, singled them out, humiliated them and arranged their trial and imprisonment": Edward Rookwood of Euston Hall. 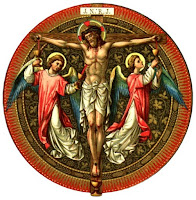 But since this is July, the month of devotion to the Precious Blood of Christ, shed during His Passion, in the Agony in the Garden, in the Scourging and Crowning with thorns, and on the Cross, it's appropriate to highlight those symbolic drops of blood and water representing the Blood and Water that flowed from His pierced Heart on the cross as described in St. John's Gospel ("But one of the soldiers with a spear opened His side, and immediately there came out blood and water. And he that saw it hath given testimony, and his testimony is true"). From the early days of the Church, Christians have meditated on the meaning of that Blood and Water, usually identifying the Blood with the Eucharist and the Water with Baptism. It's also appropriate to recall the great devotion to the Five Wounds of Christ in England before the Reformation.
They may have been hiding it, but the Chamberlain family maintained their traditional devotion, and for a time at least, may have had a priest to celebrate Mass, consecrating bread and wine into the Body, Blood, Soul, and Divinity of Jesus Christ.
Yesterday evening I was able to attend Mass in the Extraordinary Form of the Latin Rite for the Feast of the Most Precious Blood at Blessed Sacrament Catholic Church! A good start to the month, as will be the First Friday Mass at our Cathedral today!
From the Litany of the Precious Blood of Jesus:
Blood of Christ, falling upon the earth in Agony, save us.
Blood of Christ, shed profusely in the Scourging, save us.
Blood of Christ, flowing forth in the Crowning with Thorns, save us.
Blood of Christ, poured out on the Cross, save us.
Blood of Christ, price of our salvation, save us.
Posted by Stephanie A. Mann at 12:00 AM