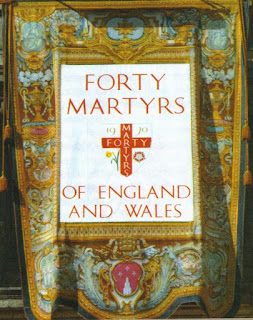 I apologize for the lack of blogging (if anyone noticed!) but I've not been feeling well this week.

Also, I admit that the Motu Proprio Pope Francis issued last Friday really shocked me as it has many who love the Traditional Latin Mass of the centuries (just as I love the Novus Ordo, the Sacrifice of the Mass I've attended most of life as a Catholic)--particularly because so many of the priest-martyrs of the English Reformation from the Elizabethan era forward celebrated essentially this form of the Mass, having learned it in Rome, and Prague, Rheims, Douai, Vallidolid, after Pope St. Pius V promulgated the 1570 Roman Missal.

One of those priests suffered horrendous torture and martyrdom on July 24, 1594: Saint John Boste. He is one of the Forty Martyrs of England and Wales canonized by Pope Paul VI in 1970.

Saint John Boste was born in northwestern England, and could be considered a revert in a way because he was born in a Catholic family, conformed at least outwardly to the Church of England to study at Oxford and become a Fellow of Queen's College, and then returned to the Catholic Church.  According to the Catholic Encyclopedia:Priest and martyr, b. of good Catholic family at Dufton, in Westmoreland, about 1544; d. at Durham, 24 July, 1594. He studied at Queen's College, Oxford, 1569-72, became a Fellow, and was received into the Church at Brome, in Suffolk, in 1576. Resigning his Fellowship in 1580, he went to Reims, where he was ordained priest, 4 March, 1581, and in April was sent to England. He landed at Hartlepool and became a most zealous missioner, so that the persecutors made extraordinary efforts to capture him. At last, after many narrow escapes, he was taken to Waterhouses, the house of William Claxton, near Durham, betrayed by one Eglesfield [or Ecclesfield], 5 July, 1593. The place is still visited by Catholics. From Durham he was conveyed to London, showing himself throughout "resolute, bold, joyful, and pleasant", although terribly racked in the Tower. Sent back to Durham for the July Assizes, 1594, he behaved with undaunted courage and resolution, and induced his fellow-martyr, Bl. George Swalwell [or Swallowell], a convert minister, who had recanted through fear, to repent of his cowardice, absolving him publicly in court. He suffered at Dryburn, outside Durham. He recited the Angelus while mounting the ladder, and was executed with extraordinary brutality; for he was scarcely turned off the ladder when he was cut down, so that he stood on his feet, and in that posture was cruelly butchered alive. An account of his trial and execution was written by an eye-witness, [Blessed] Christopher Robinson, who suffered martyrdom shortly afterwards at Carlisle.

You may read about the intensive search for Father John Boste here in John Hungerford Pollen's edition of Unpublished Documents Relating to the English Martyrs, published by the Catholic Record Society in 1908, starting on page 63. You might notice that one of those questioned during the search for John Boste was his brother Lancelot who had a copy of a document written by Blessed William Hart, executed in 1583! 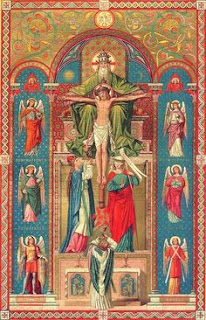 Another website points out that Saint John Boste was dedicated to celebrating the Mass as the center of his mission to Catholics during the 12 years of his service:

He travelled widely in the northern counties, and he and anyone sheltering him, indeed anyone just hearing Mass, risked death. Nevertheless he maintained his ministry for 12 years, which was a tribute both to his stamina and his faith, for most of his fellow priests were taken within days of landing in Britain. It was said of him that 'if he missed to say Mass one day, it was not his will'.

Months of cruel imprisonment in the Tower of London followed. He was racked 17 times, but betrayed no one, and he persisted in his devotion to the Mass.

As the West Durham Catholic Parishes blog notes, Father Boste openly admitted his priesthood at his trial, while emphasizing that being priest did not mean he was a traitor or plotter against Elizabeth I in anyway:

“I am a priest of the holy Catholic church: and I came, though unworthy, according to St. Paul, to preach the gospel of Jesus Christ, whereof I am not ashamed, and to administer the sacraments to my beloved countrymen….. All this I needs must confess, and I am not ashamed of it, but do greatly rejoice that I have done so.” He denied working to politically undermine the queen, saying: “My function is to invade souls, not to meddle in temporal invasions”.
In addition to praying the Angelus (his execution was thus at about 6:00 p.m.), St. John Boste prayed Psalm 114:
Dilexi. The prayer of a just man in affliction, with a lively confidence in God. Alleluia.

I have loved, because the Lord will hear the voice of my prayer.
Because he hath inclined his ear unto me: and in my days I will call upon him.
The sorrows of death have encompassed me: and the perils of hell have found me. I met with trouble and sorrow:
And I called upon the name of the Lord. O Lord, deliver my soul.
The Lord is merciful and just, and our God sheweth mercy.

The Lord is the keeper of little ones: I was little and he delivered me.
Turn, O my soul, into thy rest: for the Lord hath been bountiful to thee.
For he hath delivered my soul from death: my eyes from tears, my feet from falling.
I will please the Lord in the land of the living.
It's impossible for me to read that psalm and not think of Psalm 42, prayed by the priest, the servers, and the congregation (in pecto) at the beginning of the Mass of the 1962 Roman Missal:
Judica me, Deus. The prophet aspireth after the temple and altar of God.
A psalm for David.
Judge me, O God, and distinguish my cause from the nation that is not holy: deliver me from the unjust and deceitful man.
For thou art God my strength: why hast thou cast me off? and why do I go sorrowful whilst the enemy afflicteth me?
Send forth thy light and thy truth: they have conducted me, and brought me unto thy holy hill, and into thy tabernacles.
And I will go in to the altar of God: to God who giveth joy to my youth.
To thee, O God my God, I will give praise upon the harp: why art thou sad, O my soul? and why dost thou disquiet me?
Hope in God, for I will still give praise to him: the salvation of my countenance, and my God.
Praying that psalm at the two Traditional Latin Masses I've attended since Friday, July 16 (I wanted to attend a third but had to leave just as Mass started because I felt ill), helped me again understand and accept that God is always Good and He loves me.
Most Precious Blood of Jesus, save us!
Saint John Boste, pray for us!
Posted by Stephanie A. Mann at 12:00 AM