John Finnis and Shakespeare and Catholicism 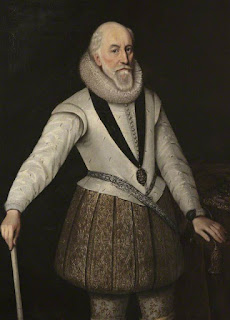 After posting about Dr. Neil Younger's article about Catholics and crypto-Catholics in Elizabeth I's regime, I found several presentations by Professor John Finnis about Shakespeare's connection to one of those Catholics in both Elizabeth's and James I's reign: Edward Somerset, the 4th Earl of Worcester, whom Elizabeth said had "reconciled what she believed impossible, a stiff papist to a good subject." Finnis and his frequent collaborator in these Shakespeare and Catholicism researches, Patrick H. Martin, identifies Worcester, and Worcester's secretary William Sterrell, as important figures in the Appellant controversy, an attempt to procure some leniency for Catholics in exchange for a vow against certain powers of the pope to depose monarchs, and Worcester specifically as a patron of two plays, A Midsummer Night's Dream and As You Like It.
In October of 2010, he presented three lectures on "Shakespeare's Patriotic Resistance" at Princeton University in the Charles E. Test Distinguished Lecture Series and you may find those lectures here, with the general thesis that we may find Shakespeare's arguments for the overthrow of the Tudor or Stuart regime because they are not fit to rule--in spite of their claims to rule based on their legitimate succession--and should be replaced that rulers who are fit to rule, as Richmond (Henry VII) replaced Richard III and Bolingbroke (Henry IV) replaced Richard II. Both usurpations were dramatized by Shakespeare.
In 2012, he spoke on Australian ABC's "Philosopher's Zone" on "Shakespeare, Identity, and Religion": Listen to that conversation with David Rutledge here.
In 2014, he spoke in the Catholic Culture Series at the University of Notre Dame on "Shakespeare and the Four Last Things":
The series began with an illuminating lecture by renowned professor of law and Center research fellow John Finnis on “Shakespeare and the Four Last Things,” where he examined Catholic themes in Richard III, Henry VIII, and the poem “The Phoenix and the Turtle.” While English Catholics of Shakespeare’s day were persecuted for their faith, Finnis argued that Shakespeare still managed to raise several theological and ethical questions in his work that were unique to Catholics at the time. In Richard III, for example, Shakespeare presents a world where one’s personal judgment corresponds to the divine judgment after death—an idea contrary to the Calvinistic view of predestination. “Conscience is massively a part of the Catholic self-understanding of the world,” Finnis argued. Meanwhile, in “The Phoenix and the Turtle,” Shakespeare calls for prayer for the dead birds of the title—figures that represented prominent Catholic martyrs of the time. Finnis concluded that, viewed through the lens of Shakespeare’s contemporary Catholic audience, one can see these Catholic values clearly at work in his writing.
You may find that presentation here.

Professor John Finnis has had a remarkable academic career, as noted at the website for Princeton presentations

John M. Finnis is Professor of Law and Legal Philosophy at the University of Oxford, Biolchini Family Professor of Law at the University of Notre Dame, and adjunct Professor in the Department of Philosophy at the University of Notre Dame. Known for his work in moral, political and legal theory, as well as constitutional law, Professor Finnis teaches courses in Jurisprudence, in the Social, Political, and Legal Theory of Thomas Aquinas, and in the Social, Political and Legal Theory of Shakespeare. He joined the Notre Dame Law School faculty in 1995. He has served as associate in law at the University of California at Berkeley (1965-66), as professor of law at the University of Malawi (Africa) (1976-78), and as the Huber Distinguished Visiting Professor of Law at the Boston College Law School (1993-94). He is admitted to the English Bar (Gray’s Inn). His service has included the Linacre Centre for Health Care Ethics (governor since 1981), the Catholic Bishops’ Joint Committee on Bioethical Issues (1981-88), the International Theological Commission (1986-92), the Pontifical Council for Justice and Peace (1990-95), and the Pontifical Academy Pro Vita (2001- present). He has published widely in law, legal theory, moral and political philosophy, moral theology, and the history of the late Elizabethan era. His published works include Fundamentals of Ethics, Moral Absolutes: Tradition, Revision and Truth, and Aquinas: Moral, Political, and Legal Theory. A five-volume edition of The Collected Essays of John Finnis will be published by Oxford University Press in March 2011. At that time, the second edition of his widely heralded book Natural Law and Natural Rights will be released, also by Oxford University Press. He earned his LL.B. from Adelaide University in 1961 and his doctorate from Oxford University as a Rhodes Scholar in 1965.
Fascinating, if complicated and rather repetitive (the same tropes of the "Phoenix and the Turtle", William Sterrill's activity, etc come up in nearly each set of presentations) material, offered for your consideration.
Image Credit (Public Domain): Portrait of Edward Somerset, 4th Earl of Worcester signed "Gilbertus Jackson" and dated 1621.
Posted by Stephanie A. Mann at 12:00 AM