On July 28, 1540, Henry VIII matched up Thomas Cromwell and Sir Walter Hungerford to be executed on Tower Hill while he married his fifth wife, Catherine Howard at Oatlands Palace after having his fourth marriage, to Anne of Cleves, declared null and void by Thomas Cranmer.

On July 30, 1840, Henry VIII matched up three Catholic supporters of his first wife, Catherine of Aragon, and three Zwinglian supporters of Thomas Cromwell, to be executed at Smithfield. The Catholics were hanged, drawn, and quartered; the Zwinglians were burned alive at the stake.

The chronicler Edward Hall described the event, obviously more sympathetic to one group than the other: 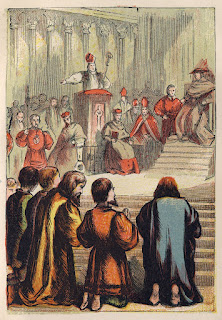 The thirtie daie of July, were drawen on herdelles out of the Tower to Smithfield, Robert Barnes Doctor in Diuinitee, Thomas Garard, and Wyllyam Jerome Bachelers in Diuinitee, Powell, Fetherston and Abell. The firste three were drawen to a stake, there before set up, and were hanged, hedded, and quartered. Here ye must note, that the first three, wer menne that professed the Gospell of Jesu Christ, and were Preachers thereof … [the first three] were detestable and abhominable Heretickes, and … had taught many heresies, the nomber whereof was to greate in the atteindor to be recited, so that there is not one alleged … in deede at their deathe, they asked the Sherifes, wherefore they were condempned, who answered, thei could not tell: but if I maie saie the truthe, moste menne said it was for Preachyng, against the Doctryne of Stephen Gardiner Bishoppe of Wynchester, who chiefly procured this their death … but greate pitie it was, that suche learned menne should bee cast awaie, without examinaction, neither knowyng what was laied to their charge, nor never called to answere.

The laste three … were put to death for Treason, and in their attaindor, is speciall mencion made of their offences, whiche was for the deniyng of the kynge ssupremacie, and affirmyng that his Mariage with the Lady Katheryne was good: These with other were the treasons, that thei wer attainted of, and suffered death for.
The problem, of course, with Hall's bias is that both groups were judged by Henry VIII to have betrayed him: Hall's heroes had defied his will for the Church of England and the Six Articles he was supporting at that time, as least, as a way to dispel dissent; the three Catholics by having defended his first wife Catherine of Aragon, crowned and anointed as his queen, who had suffered imprisonment for a long time--three wives had come and gone--that is, six years. Thomas Abell had time to carve a bell in the wall of his cell! 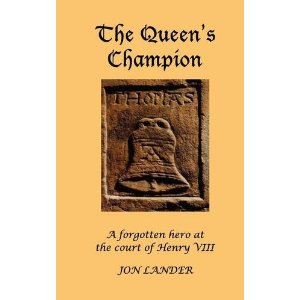 Thomas Abell, Richard Fetherston, and Edward Powell had all been chaplains and defenders of Queen Catherine of Aragon--very learned men; graduates of the University of Oxford. Thomas Abell had written Invicta veritas. An answere, That by no manner of law, it may be lawfull for the most noble King of England, King Henry the eight to be divorced from the queens grace, his lawfull and very wife. B.L. in 1532 and had also been implicated in the Nun of Kent cause celebre. Richard Fetherston had also written against Henry's divorce of Catherine in Contra divortium Henrici et Catharinae, Liber unus although no copy of the text survives. He also tutored the Princess Mary. Henry VIII had favored Edward Powell for his works against Lutheran doctrines in earlier days, but then Powell ran afoul of Henry's changing policies and desires to cast aside Catherine of Aragon. You may read more about them and their trials in Bede Camm's book on the martyrs beatified by Pope Leo XIII.The Zwinglians Robert Barnes, Thomas Garrett, and William Jerome were also taken to Smithfield that day. Robert Barnes had attended the University of Cambridge and had "hung out" at the White Horse Inn with other Lutheran minded students and masters. While Thomas Cromwell was in power, they had preached against the Catholic Bishop, Stephen Gardiner, but once Cromwell fell and was executed on July 28, 1540, they lost their protector and were sentenced to death.Both the Catholics and the Zwinglians were sentenced to death without trial. Bills of Attainder condemned the Catholics as Traitors and the Zwinglians as Heretics. Three hurdles dragged the men to Smithfield from the Tower; each hurdle held a traitor and a heretic. At Smithfield, the traitors were hung, cut down and butchered while alive, their bodies quartered and their heads cut for display; the heretics were burnt alive at the stake. A poem titled, "The Metynge of Doctor Barnes and Dr. Powell at Paradise Gate and of theyre communicacion bothe drawen to Smithfylde fro the Towar" described the juxtaposition of the Catholic and the Protestant that day.
As the Executed Today website sums it up:
The one thing that couldn’t possibly be confused in the day’s proceedings was that matters of the faith were matters of state, and in them Henry would brook heterodoxy of neither the liberal nor conservative variety.

“Good Lord! How do these people live?” exclaimed a foreign observer (cited here). “Here are the papists hanged, there are the anti-papists burnt!”
Catherine's former chaplains were beatified by Pope Leo XIII; the Zwinglian preachers were honored by John Foxe in his Acts and Monuments. And remember that Catherine Howard would be beheaded, matched up with Jane Boleyn, Lady Rochford, without even celebrating her second wedding anniversary, on February 13, 1542.
Blessed Thomas Abell, pray for us!
Blessed Richard Fetherston, pray for us!
Blessed Edward Powell, pray for us!
Image credit (Public Domain): "Barnes and his Fellow-Prisoners Seeking Forgiveness", from an 1887 edition of Foxe's Book of Martyrs, illustrated by Kronheim.
Image credit (book cover): The Queen's Champion by John Lander
Posted by Stephanie A. Mann at 12:00 AM