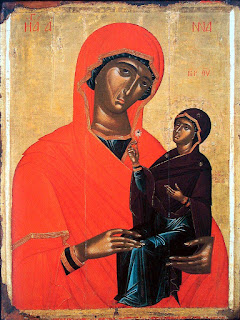 In the Catholic Church, today is the Feast of St. Anne and St. Joachim, the maternal grandparents of Jesus Christ (Mary's parents) as named in the Protoevangelicum of St. James. On the 1970 Roman Calendar, they are honored together; on the 1962 Roman Calendar, they are honored separately--St. Anne today and St. Joachim on August 16. In the Church of England, Sts. Anne and Joachim are also commemorated today. In some Eastern Orthodox Churches, St. Anne is honored on September 9th in connection to the birth of the Theotokos (devotion to St. Anne began earlier in the East than in the West).

England developed devotion to St. Anne in the early Middle Ages as this study demonstrates:

By 1300 at least five important English monastic foundations were also claiming to have relics of Anne, and dozens of additional shrines, altars, and chapels had been dedicated to her, both in England and on the Continent.

Liturgical commemorations of Anne in the West seem to have followed a similar course of development, except that monastic houses in England played a more central role. The story of Joachim and Anne received at least passing mention in the liturgy for one of the oldest annual feasts of Mary, the Nativity of the Virgin (September 8 in Western calendars), which was included in the Sacramentary of Gelasius (c. 700) and firmly established in Anglo-Saxon England by the ninth or tenth century. Anne's role tended to take on more importance when an annual feast was added to celebrate the Conception of the Virgin (observed exactly nine months earlier - i.e., December 8). There is good evidence that the Conception was being commemorated at Winchester, Exeter, and Canterbury before the Norman Conquest, and this feast day was revived in the twelfth century through the efforts of Benedictine writers like Eadmer of Canterbury and Anselm of Bury, although it became generally established in England only after 1328 (when it was made obligatory for the whole Province of Canterbury) and was not clearly mandated for the Church as a whole until 1476 (when Pope Sixtus IV confirmed the Council of Basel's ruling on the matter). England also preceded most of the Continent in instituting a separate feast day for Anne herself (July 26). The date traditionally associated with the adoption of this feast is 1382, the year in which Pope Urban VI authorized its celebration throughout England, but it was already being celebrated in the twelfth century in some of the great English monastic churches, most notably those at Worcester and Evesham.

The great flowering of Anne's cult among the laity occurred between about 1300 and the Council of Trent in the mid sixteenth century. By 1540 there were at least 40 medieval churches and chapels under her patronage in England, the majority of which had been dedicated or rededicated to her during the previous two centuries. She also had major shrines at Buxton (Derbyshire) and Wood-Plumpton (Lancashire), and was frequently chosen by prosperous laymen and women as patron saint of their guilds and recipient of special bequests and offerings. As Gail Gibson has shown, such devotion to her seems to have been unusually strong in East Anglia. . . .

Please read the rest there. You may find information about the shrine at Buxton in Derbyshire here.
According to Peter Stiles in the Encylopedia of the Bible and Its Reception vol. 2 published by Walter de Gruyter in Berlin/New York 2009, which I accessed on Academia.edu:
John Lydgate (ca. 1370–1451) wrote two poems in honour of St. Anne. A Praise of St. Anne and An Invocation to Seynte Anne are significant contributions to the range of English poems on Anne between the 13th and the early 16th centuries, as are poems by Lydgate’s contemporaries, John Audelay and Osbern Bokenham. Bokenham’s Life of St. Anne is an extensive treatment of her life, one of thirteen the Augustinian friar wrote about female saints. Anne appears in several medieval plays, including the N-Town cycle and the Digby manuscript play of Candelmas Day and the killing of the children of Israel, which is set within the communal celebration of Saint Anne’s Day.
Saint Anne, pray for us!
Saint Joachim, pray for us!
Holy Mary, Mother of God, pray for us!
And of course, I can't forget Saint Anne Line! Pray for us!
Image credit (public domain): Icon of St. Anne and the Theotokos (15th Century)
Posted by Stephanie A. Mann at 12:00 AM