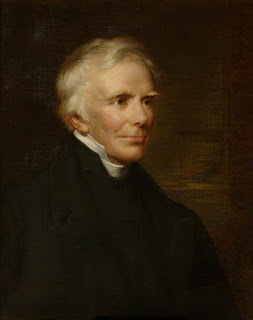 In the Church of England, today is the feast day of John Keble, Tractarian, pastor, and poet. He was born on April 25, 1792 and died on March 29, 1866--so obviously his feast is not celebrated on the date of his death. The date chosen for his memorial in the Church of England is the anniversary of his "National Apostasy" sermon, delivered in the University Church of St. Mary the Virgin in 1833. John Henry Newman always considered that date the beginning of the Oxford Movement. As this biography on the Project Canterbury website describes that event:
The text of the sermon was i Sam. xii. 23: 'As for me, God forbid that I should sin against the Lord in ceasing to pray for you; but I will teach you the good and the right way.' The preacher's aim was to draw public attention to the grave and pressing dangers that threatened the Church both from State interference with her liberties, and from the widespread decay of religious convictions. At such a time it was the duty of all who valued the cause of the Apostolic Church to devote themselves to its defence. 'Surely,' said the preacher, 'it will be no unworthy principle if any man is more circumspect in his behaviour, more watchful and fearful of himself, more earnest in his petitions for spiritual aid, from a dread of disparaging the holy name of the English Church in her hour of peril, by his own personal fault and negligence. . . . There may be, as far as he knows, but a very few to sympathize with him. He may have to wait long, and very likely pass out of this world, before he see any abatement in the triumph of disorder and irreligion. But if he be consistent, he possesses to the utmost the personal consolations of a good Christian; and as a true Churchman, he has the encouragement which no other cause in the world can impart in the same degree; he is calmly, soberly, demonstrably sure that, sooner or later, his will be the winning side, and that the victory will be complete, universal, eternal.'

The sermon was published on July 22, under the title National Apostasy. It does not seem to have excited much attention at the time. One of the two judges before whom it was preached is said to have remarked that it was 'an appropriate discourse.' Dr. Pusey, we are told, considered 'some passages rather too pointed.' But there were others who had a truer realization of its significance. To Newman's judgment, already quoted, may be added the words of Dr. J. B. Mozley, one of the ablest of the Tractarians, and one of the deepest thinkers of his time: 'I cannot help thinking it a kind of exordium of a great revolution--shall I call it?--coming on, whether rapidly or slowly we cannot tell, but at any rate most surely.'

Mozley's comment about "a great revolution" matches one of the other great historical events we remember this day: the Storming of the Bastille in 1789, usually identified as the beginning of the French Revolution--Bastille Day.

In Chapter 1 of the Apologia Pro Vita Sua, Newman remembers his high regard for Keble:

The true and primary author of it, however, as is usual with great motive-powers, was out of sight. Having carried off as a mere boy the highest honours of the University, he had turned from the admiration which haunted his steps, and sought for a better and holier satisfaction in pastoral work in the country. Need I say that I am speaking of John Keble? The first time that I was in a room with him was on occasion of my election to a fellowship at Oriel, when I was sent for into the Tower, to shake hands with the Provost and Fellows. How is that hour fixed in my memory after the changes of forty-two years, forty-two this very day on which I write! I have lately had a letter in my hands, which I sent at the time to my great friend, John William Bowden, with whom I passed almost exclusively my Under-graduate years. "I had to hasten to the Tower," I say to him, "to receive the congratulations of all the Fellows. I bore it till Keble took my hand, and then felt so abashed and unworthy of the honour done me, that I seemed desirous of quite sinking into the ground." His had been the first name which I had heard spoken of, with reverence rather than admiration, when I came up to Oxford. When one day I was walking in High Street with my dear earliest friend just mentioned, with what eagerness did he cry out, "There's Keble!" and with what awe did I look at him! Then at another time I heard a Master of Arts of my college give an account how he had just then had occasion to introduce himself on some business to Keble, and how gentle, courteous, and unaffected Keble had been, so as almost to put him out of countenance. Then too it was reported, truly or falsely, how a rising man of brilliant reputation, the present Dean of St. Paul's, Dr. Milman, admired and loved him, adding, that somehow he was strangely unlike any one else. However, at the time when I was elected Fellow of Oriel he was not in residence, and he was shy of me for years in consequence of the marks which I bore upon me of the evangelical and liberal schools. At least so I have ever thought. Hurrell Froude brought us together about 1828: it is one of the sayings preserved in his Remains,—"Do you know the story of the murderer who had done one good thing in his life? Well; if I was ever asked what good deed I had ever done, I should say that I had brought Keble and Newman to understand each other."
Newman continued to hold Keble in high regard, even after his conversion: In Newman and His Contemporaries, Edward Short quotes a letter Newman wrote to his sister Jemima as he considered becoming an Oratorian that he thought St. Philip Neri and John Keble very similar. The saint and his erstwhile friend shared the same "extreme hatred of humbug, playfulness [Keble and Neri were playful], nay, oddity, tender love for others, and severity" (p. 65). Keble could have become the kind of saint that Neri was, Newman thought. Based on his love and admiration to Neri that is high praise indeed.
After Newman left the Oxford Movement, Oxford, and the Church of England and became a Catholic on October 9, 1845, Newman and Keble did not see each other for years. As this EWTN document notes:
Newman called to see Keble in his vicarage at Hursely on September 12, 1865. They did not recognize each other. "How mysterious that first sight of friends is! For when I came to contemplate him, it was the old face and manner, but the first effect and impression was different."1 Newman was taken aback to discover that Pusey was also paying a visit. "As we three sat together at one table, I had as painful thoughts as ever I recollect, though it was pain, not acute, but heavy. There were three old men, who had worked vigorously in their prime."
Until Keble died, Newman hoped that he would join him in the "one true fold of Christ", the Catholic Church. Newman believed that Keble had many tendencies toward the Catholic Church: his piety, devotion to Mary and the saints, his liturgical and Sacramental emphasis, his desire for apostolic authority--but Keble remained in the Church of England, to Newman's pain and sorrow.
Image Credit (Public Domain): Portrait of John Keble
Posted by Stephanie A. Mann at 12:30 AM