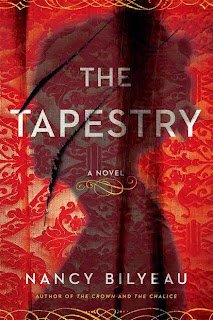 For the English Historical Fiction Authors blog, author Nancy Bilyeau writes about the former Earl of Essex, Thomas Cromwell's execution--and the other man who suffered beheading on July 28, 1540:

Cromwell was arrested on June 10, 1540, in a way meant to cause as much humiliation as possible. The Duke of Norfolk ripped the Order of St. George from around Cromwell's neck while the Earl of Southampton tore the Order of the Garter insignia from his gown."Traitors must not wear the garter," shouted Norfolk. Cromwell was then hustled directly to the Tower of London; within two hours, the treasurer of the royal household had emptied Cromwell's house of valuables while others ransacked his papers.

There was no trial. Cromwell was condemned of treason and "abominable heresies" and executed on July 28, 1540.

But Cromwell did not die alone.

Following Thomas Cromwell to the scaffold erected on Tower Hill (not Tyburn, as some historians have written) was Sir Walter Hungerford. The decision to behead two men that day was unusual, though not unprecedented. Two noblemen that Cromwell had targeted for destruction--Henry Pole, Lord Montague, and Henry Courtenay, Marquess of Exeter--died together in late 1538. But those two men, condemned without trial for treason, were lifelong friends, distantly related, and requested a joint execution.

Why was Sir Walter Hungerford chosen for this ghastly honour? Cromwell was the author of the Reformation, a brilliant and ruthless statesman. His enemies sent Hungerford on the same path, from Tower of London cell to scaffold. It's a mystery that still swirls around that hot, pitiless day. In this post, I examine the myths, the theories and evidence. . . .

Cromwell was the first to die, in a bungled beheading infamous for its ghastliness. Hungerford followed. Both bodies were carted to the nearby Church of St. Peter ad Vincula, within the Tower walls. Their graves are a few feet from Anne Boleyn's. As Macaulay wrote, "In truth there is no sadder spot on earth than that little cemetery."

Because he was a traitor, Hungerford's estates and homes were claimed by the crown. Henry VIII gave Farleigh Hungerford Castle to his brother-in-law, Sir Thomas Seymour. It was not a small acquisition. Which is perhaps as good a reason as any for the destruction of Sir Walter Hungerford.

Nancy depicts these executions, and the atmosphere of such public events, most immediately in the third novel of her Joanna Stafford trilogy, The Tapestry, which I reviewed here. Two days hence and we will see some of the fallout of Cromwell's demise as three Zwinglians suffer at Smithfield.
Posted by Stephanie A. Mann at 12:30 AM