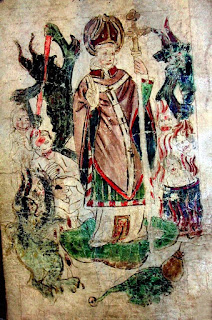 Most commentators are mentioning that Saint John Henry Newman will be the first saint from the British isles canonized since St. John Ogilvie (1976). Ogilvie was canonized as a martyr from Scotland. Newman will also be the first Confessor saint--one who did not suffer as a martyr--from England for hundreds of years. For 618 years, in fact.

In 1401 Pope Boniface IX, in the midst of the Western Schism, canonized St. John Twenge or Thwing of Bridlington. According to the Catholic Encyclopedia he is (was) the:

Last English saint canonized, canon regular, Prior of St. Mary's, Bridlington, b. near the town, 1319; d. at Bridlington, 1379. He was of the Yorkshire family Twenge, which family in Reformation days supplied two priest-martyrs and was also instrumental in establishing the Institute of the Blessed Virgin Mary at Bar Convent, York. John completed his studies at Oxford and then entered the Priory of Bridlington. Charged successively with various offices in the community, he was finally despite his reluctance elected prior, which office he held until his death. Even in his lifetime he enjoyed a reputation for great holiness and for miraculous powers. On one occasion he changed water into wine. On another, five seamen from Hartlepool in danger of shipwreck called upon God in the name of His servant, John of Bridlington, whereupon the prior himself appeared to them in his canonical habit and brought them safely to shore. After his death the fame of the miracles wrought by his intercession spread rapidly through the land. Archbishop Neville charged his suffragans and others to take evidence with a view to his canonization, 26 July, 1386; and the same prelate assisted by the Bishops of Durham and Carlisle officiated at a solemn translation of his body, 11 March, 1404 (sic), de mandato Domini Papae. This pope, Boniface IX, shortly afterwards canonized him. The fact has been doubted and disputed; but the original Bull was recently unearthed in the Vatican archives by Mr. T.A. Twemlow, who was engaged in research work there for the British Government. St. John was especially invoked by women in cases of difficult confinement. At the Reformation the people besought the royal plunderer to spare the magnificent shrine of the saint, but in vain; it was destroyed in 1537. The splendid nave of the church, restored in 1857, is all that now remains of Bridlington Priory. The saint's feast is observed by the canons regular on 9 October.

Bridlington Priory is of course a Church of England church. The priory's website posts this information about the Catholic saint. More information about the saint from the Oxford Dictionary of National Biography, provided for free! including these details about the progress of his cause, which took much less time than Newman's:

A canon named Hugh, who may himself have been a member of the Bridlington community, wrote the first biography of John between 1379 and 1401. A Middle English verse life in the northern dialect by one who claimed to have witnessed Thwing's deeds appeared about the same time. Reports of miracles occurring at his tomb prompted Alexander Neville, archbishop of York, to delegate Robert Dalton, his vicar-general, to interview witnesses to these miracles in 1386. In 1388, 'out of regard for John de Thweng, late Prior', Richard II gave permission to the Bridlington Priory to crenellate its buildings. According to Walsingham, reports of miracles at Thwing's tomb had spread all over England by 1389. Henry Bolingbroke made an offering at Bridlington in 1391 upon returning from a campaign in Prussia and, as King Henry IV, he sent John Guisburn, a canon of Bridlington, to Rome in 1400 to secure Thwing's canonization. In a bull of Boniface IX, dated 24 September 1401, John Thwing was officially canonized. With the aid of a grant from Henry IV, a shrine for his remains was constructed adjacent to the Bridlington Priory. In 1404 Archbishop Scrope and the bishops of Lincoln and Carlisle officiated at the translation of Thwing's body. Henry IV placed his son Prince Henry under the patronage of St John of Bridlington, and the prince made an offering of 5 marks at the shrine in 1407 in fulfilment of a previous vow. The hagiographer John Capgrave's edition of the life of St John of Bridlington added new accounts of miracles to those mentioned in the first biography by Hugh.

The two martyrs mentioned in the Catholic Encyclopedia notice are Blesseds Edward and Thomas Thwing. More about them here.
Posted by Stephanie A. Mann at 12:30 AM