St. James the Greater and the English Reformation 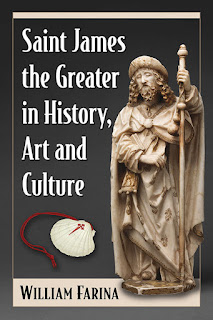 Today is the Feast of St. James, the son of Zebedee, also called the Greater, one of the Twelve Apostles, not to be confused with St. James the Lesser or St. James the Just, the bishop of Jerusalem. He is renowned today because of the popularity of the Camino de Santiago and his shrine church in Compostela, Spain. Pilgrims walk the Camino to visit his shrine and gain the Indulgences of the pilgrimage.

There was an English route to the shrine which began in either A Coruña (Corunna) or Ferrol on the coast. After crossing the seas from England, Ireland, or Northern Europe, the pilgrims walked at least 75 kilometers or 46 miles. This was also a major trade route during the late Middle Ages.

Of course, once pilgrimages and other devotions to the saints, including the saints previously honored in England like Our Lady of Walsingham and St. Thomas of Canterbury, were discouraged, this pilgrimage to Spain from England was curtailed. William Farina, in his Saint James the Greater in History, Art and Culture, further suggests that there was a great animosity in England toward this traditional devotion to St. James the Greater because it was in Spain. He notes that Henry VIII named St. James Palace in the City of Westminster for St. James the Lesser "in direct opposition to the popular Spanish cult"--even though the Palace was built on the site of a former leper hostel named for St. James the Lesser, so perhaps it wasn't such direct opposition but continuity with the past. Farina also interprets several passages from Shakespeare plays, especially naming one of his greater villains, Iago in Othello, after the (Spanish) saint, as displaying not only national English animosity, but Shakespeare's personal animosity to Saint James the Greater because of his shrine in Spain, even though there were many churches in England dedicated to this saint. Finally, Farina states that more churches were built in England after the Break from Rome dedicated to St. James the Lesser than to St. James the Greater, although he does not provide any evidence of that assertion. Usually, St. James the Lesser is combined with St. Philip as in their shared feast Saints Philip and James in May.

We do know, however, that Sir Francis Drake's excursions into Spain provoked fear that English forces would desecrate the shrine of Santiago de Compostela, as this website explains:

In May 1589, faced with the fear of an attack on Compostela by the English troops of Francis Drake, whose ships were attacking Corunna, Archbishop Juan de Sanclemente ordered the concealment of the body of the apostle in the presbytery of the Cathedral. Its exact location was unknown for several centuries until 1879, the year of the second discovery of the apostolic remains.

So the conflict between England and Spain during the reigns of Elizabeth I and Philip II indirectly impacted the shrine of Saint James the Greater at Compostela, even though the Spanish forces at Corunna was prepared to thwart his attack.

In England, however, there was a Spanish presence and embassy chapel in London throughout the reigns of Elizabeth I and James I as the parish church now called St. James-Spanish Place explains:

In the reign of Elizabeth I the Bishops of Ely let their palace and chapel in Ely Place to the Spanish Ambassador, and until the reign of Charles I it was occupied by the representative of the Court of Spain. During this period the chapel was freely used by English Catholics and became a place of sanctuary for them.

St. James-Spanish Place celebrates its patronal feast today with a Solemn Pontifical Mass and glorious music, its choir accompanied by His Majestys Sagbutts and Cornetts: