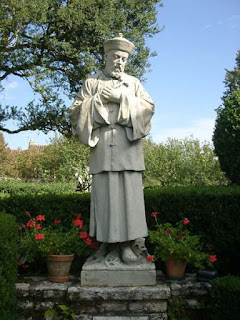 Like many Catholics, I receive lots of mail from religious orders, offering cards, Masses, religious items, etc. My late mother always had this rule: if you use what they send you, send them a donation! Her other rule was, once you order from them, they will keep sending you "free gifts" and other offers! This is their way of raising funds obviously and we have to be just and generous. At least that's what my mother taught me.

Yesterday was the feast of Saint Augustine Zhao Rong and companions, 120 martyrs who suffered between 1648 and 1930 in China, canonized in 2000 by Pope Saint John Paul II. I received a medal from the Vincentian Association of the Miraculous Medal (AMM)--which I'd ordered after receiving their Summer Newsletter--of another martyr who suffered in China canonized by Pope Saint John Paul II in 1996: Saint John Gabriel Perboyre, a French missionary. More from the AMM about this saint:

The eldest son of Pierre and Marie, John Gabriel, was born on the 6th of January 1802. In 1816 John Gabriel accompanied a younger brother, Louis, to a high school in Montauban that had been started by their uncle, Fr. Jacques Perboyre, C.M., to prepare young men for the seminary. In the Spring of 1817, his teachers noting John Gabriel’s intelligence and piety suggested he remain with his brother and continue his studies. Though willing to return home if needed on the farm, John Gabriel wrote to his father that he believed that the Lord was calling him to the priesthood.

From his earliest days in the seminary, John Gabriel had longed for the China mission. In 1832, however, his superiors appointed him a novice director in the Vincentian Motherhouse. The departure of some Vincentians to China in 1835 renewed his missionary longing. Poor health stood in the way, but finally his doctor saw the voyage to the Orient as a possible cure. Five months at sea brought John Gabriel to Macao where he studied Chinese.

In December of 1835, Father Perboyre, along with several missionaries, set sail from Macao in a Junk. Since the Chinese law forbade the entry of Christian missionaries, the Christian captain and crew disguised themselves as merchants and smuggled John Gabriel on to the mainland of China.

Following a five month overland journey to the Vincentian mission center in Ho-nan, Father Perboyre suffered a severe attack of fever that forced him to rest for three months. But he was able enough to continue his mastering of the Chinese language. In the company of two Chinese Vincentians he spent the years 1837 and 1838 reanimating the faith in Catholic villages by preaching, catechizing and administering the sacraments. Some of the Vincentian mission areas were desperately poor and John Gabriel shared the meager fare of his flock. 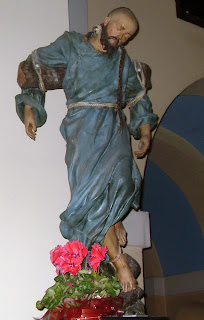 For more than a century, China outlawed Christianity and had a death penalty on all Europeans attempting to spread the faith. Authorities often overlooked this law, but in 1839 the Viceroy of the province of Hu-pei began a persecution and used his local Mandarins to obtain the names of priests and catechists in their areas. In September 1839, the Mandarin of Hu-pei, where there was a Vincentian mission center, sent soldiers to arrest the missionaries. Warned of the danger by some Christians, the priests scattered in different directions. John Gabriel hid in a bamboo forest, but a beaten and tortured catechist led the soldiers to him.

Frequently tortured in prison, Father Perboyre refused to betray his faith and his associates. In May 1840 his case went to the Emperor where he was found guilty of preaching Christianity and condemned to death. John Gabriel Perboyre was executed on September 11, 1840, in the Chinese custom of being tied to a stake and triple strangled. Andrew Fong, a generous and valiant catechist who had aided Father Perboyre in his imprisonment, retrieved his body and buried it in the Christian cemetery where Blessed Francis Regis Clet, C.M., was buried. Both their remains now repose in the chapel of the Vincentian Motherhouse in Paris, France.

I visited the Motherhouse on Rue de Sevres (after a visit to the Chapel of the Miraculous Medal and before visits to La Grande Epicerie and Le Bon Marche!), but did not see his shrine or that of Clet. I'll have to review my souvenirs to see if I purchased a brochure!

O my Divine Savior,
Transform me into Yourself.
May my hands be the hands of Jesus.
Grant that every faculty of my body
May serve only to glorify You.

I pray You
To destroy in me all that is not of You.
Grant that I may live but in You, by You and for You,
So that I may truly say, with Saint Paul,
“I live – now not I – But Christ lives in me. Amen.

His feast day is September 11.

The image of the martyr chained to the cross reminds me of Blessed John Forest, the English martyr burned alive for the religious crime of heresy during Henry VIII's reign. He was not tied to a stake but suspended above the fire just as this martyr was not nailed to the cross but hanged from it and strangled.

You might notice in the AMM newsletter that St. John Gabriel Perboyre's feast is not permitted to be celebrated in China by the Communist authorities. While Catholics and other Christians--and some Muslims--are suffering harassment and persecution by the Communists, I'm praying with St. John, St. Augustine and companions, and other martyrs who have suffered to intercede for the suffering Church in China now.

Image source and attribution: public domain (statue of martyrdom)
Posted by Stephanie A. Mann at 12:30 AM