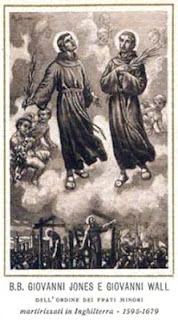 Alias Wall and Jones, two of the 40 Martyrs of England and Wales!

Saint John Jones, OFM was a recusant martyr during the reign of Elizabeth I. Born in Wales, he joined the Franciscans in England during the reign of Mary I, then went into exile, completed his novitiate, and then was ordained and prepared to return to England as a missionary:

Towards 1590 John was sent to the friary of Ara Coeli in Rome, the general headquarters of the Order. From there he wished to return to England to take part in the mission to care for faithful Catholics, who risked their livelihoods and often their lives to sustain their missionary priests. The priests themselves were subject to the gruesome death of hanging, drawing and quartering as traitors for the simple fact of exercising their priesthood. John begged an audience with the Pope and Clement VIII embraced him, gave him a solemn blessing and told him: “Go, because I believe you to be a true son of Saint Francis. Pray to God for me and for his holy Church."

In England John Jones exercised an heroic hidden ministry, animating the Catholic faith among recusants and prudently seeking to reconcile those who had submitted to Elizabeth's Church of England. The existence of a missionary priest in England was one of frequent moves, constant vigilance and continued flight from Elizabeth's vigilant secret services, supervised by William Cecil and Francis Walsingham.

Despite his care, John Jones was caught in late 1595 or early 1596 by Richard Topcliffe, who nurtured a cruel hatred for the Catholic faith and was sanctioned by the Queen to maintain a private torture chamber in his house for the Catholic priests he apprehended. John Jones was accused of being a spy and sent to the notorious Clink prison, from which we derive the expression “being in clink”. There he languished for nigh on two years awaiting trial. In prison Jones continued his ministry and converted many, including Saint John Rigby, who was himself martyred two years after John Jones (on 21st June 1600).

On 3rd July 1598 John Jones was finally brought to trial for having exercised his ministry as a Catholic priest in England. He was sentenced to hanging, drawing and quartering at Saint Thomas Watering, but was meanwhile imprisoned at Marshalsea prison. The Jesuit Henry Garnet recounts in a letter that on 12th July 1598 John was tied to a trellis and dragged to the place of his torment. He was held there for an hour before execution during which time Topcliffe harangued the crowd with his supposed crimes. Garnet recounts that the crowd was touched more by John's prayers than by the calumnies of his torturer and executioner. His remains were hung up on the road between Newington and Lambeth. 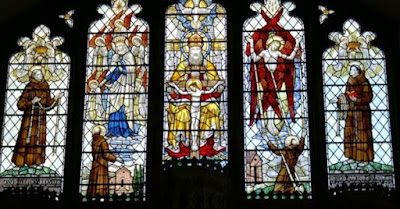 Image credit: Used by permission of the webmaster: A stained glass depiction of Franciscan Saints above the high altar [at the former Chilworth Friary of the Holy Ghost]: at the extreme left is Blessed John Jones, at the extreme right Blessed John Wall (also known as Joachim of St Anne), both of whom are now canonised Saints.

He shares his feast with a Popish Plot Martyr, St. John Wall. This website (Roman Catholic Saints) uses his name in religion (and St. John Jones's) to tell his story:

John Wall, in religion Father Joachim of St Anna, was the fourth son of Anthony Wall of Chingle (Singleton) Hall, Lancashire. He was born in 1620, and when very young, was sent to the English College at Douai. From there he proceeded to Rome, where he was raised to the priesthood in 1648. Several years later he returned to Douai and was clothed in the habit of St Francis in the convent of St Bonaventure. He made his solemn profession on January 1, 1652. So great was the estimation in which he was held by his brethren, that within a few months he was elected vicar of the convent, and soon after, master of novices.

In 1656 Father Joachim of St Anna joined the English mission, and for 12 years he labored on Worcestershire under the names of Francis Johnson or Webb, winning souls even more by his example than by his words. At Harvington to this day the memory of Blessed Father Johnson is cherished, and stories of his heroic zeal are recounted by the descendants of those who were privileged to know and love the glorious martyr.

Some of the charges raised against Father Wall when he was captured, were that he had said Mass, heard confessions, and received converts into the Church. He was accidentally found, in December 1678, at the house of a friend, Mr Finch of Rushock, and carried off by the sheriff's officer. He was committed to Worchester (sic) jail, and lay captive for five months, enduring patiently all the loneliness, suffering, and horrors of prison life, which at that time were scarcely less dreadful than death itself.

The Franciscan website makes his entanglement with the Popish Plot clear:

He remained there for 22 years ministering to the Catholics of the area. In 1678 he went to London to meet the Jesuit Claude de la Colombière, and the two spoke together of their desire for martyrdom. The context of this meeting was the renewed persecution that was unleashed in the wake of the incriminating lies of Titus Oates and his invented Catholic plot against King Charles II.

Returning from this encounter, John was staying with a friend in Rushock Court. There he was mistaken for one of the so-called plotters, Francis Johnson, and arrested. . . . .

One of Father Wall's brethren in religion, Father William Levison, has the privilege of seeing the martyr for the space of four or five hours on the day before his execution. Father William tells us:


"I heard his confession and communicated him, to his great joy and satisfaction. While in prison he carried himself like a true servant of his crucified Master, thirsting after nothing more than the shedding of his blood for the love of his God, which he performed with a courage and cheerfulness becoming a valiant soldier of Christ, to the great edification of all the Catholics, and admiration of all the Protestants."

Father Wall's martyrdom took place on Red Hill, overlooking the city of Worcester, on August 22, 1679. His head was kept in the convent at Douai until the French Revolution broke out and the community fled to England. What became of it, then, is not known.

Saints Geoffrey and Joachim were beatified in 1929 and canonized in 1970 under the names John Jones and John Wall.