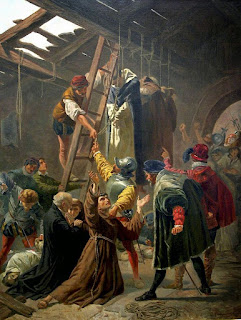 Several years ago, when Matthew Bunson was the editor of OSV's The Catholic Answer Magazine, he published my article on the Martyrs of Gorkum (July/August 2016). OSV has ceased print publication of that magazine, but that article--and some others I written around that time--is on-line in a publication called Simply Catholic. I had to write a rather long historical exposition to explain the circumstances of these martyrdoms, describing the conflict between Catholics and Protestants in the Netherlands during the Eighty Years War, including the role of "The Sea Beggars", pirates that Elizabeth I supported by allowing them to dock at English ports:

John of Cologne, a Dominican pastor, came to Gorkum after hearing of the others’ arrest to offer spiritual consolation and thus was arrested.

These 19 were held in prison from June 26 until July 6 and then taken in two separate groups to Brielle to appear before the leader of the Sea Beggars, William de la Marck.

They were given the chance to renounce their allegiance to the pope and to deny the Real Presence in the Eucharist. They refused.

Throughout their imprisonment and interrogations, the 19 were brutalized, offered for public display and held in spite of orders from the leader of the Dutch rebellion, William the Silent (the Prince of Orange).

On July 9, 1572, these witnesses to Christ were hanged. Their bodies were mutilated during their executions and after, before they were dumped in a ditch.

Catholics in the Netherlands immediately started visiting the site of their execution and venerating them as martyrs and intercessors. Their relics were taken to a Franciscan friary in Brussels.

Pope Benedict XIV beatified the Franciscans and their companions in 1675.

Brad S. Gregory recounts in “Salvation at Stake: Christian Martyrdom in Early Modern Europe” (Harvard University Press, 1999) that on Dec. 9, 1688, the archbishop of Mechelen honored the Gorkum martyrs with a Mass and procession in Brussels that began at the friary and continued to the Cathedral of St. Gudule (now dedicated to St. Michael the Archangel) and back to the friary.

Gregory notes that “virtually every [person in Brussels] must have known about the Gorkum martyrs and the local repose of their relics” (pp. 300-301) after this great event.

When the friary was suppressed in 1796 during the French Revolution’s campaign of de-Christianization (Brussels was in French territory then), the relics were moved to the Church of St. Nicholas just off the Grand Place.

Pope Pius IX canonized the Gorkum martyrs in 1865 and, in 1870, a gilded bronze reliquary was created for the relics, decorated with their images on the sides of the rectangular case and events from their arrest and martyrdom on the lid. . . .

Please read the rest there. More about the painting of their martyrdom here.
Posted by Stephanie A. Mann at 12:30 AM