The Cause of the Irish Martyrs 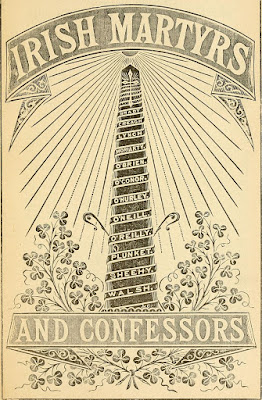 As announced, the Archdiocese of Armagh celebrated the 350th anniversary of St. Oliver Plunkett's appointment as the Archbishop of Armagh in 1669 as described by The Irish Catholic:

People from across the country braved a three-day pilgrimage in honour of St Oliver Plunkett this week, which culminated in the unveiling of a statue of the martyred saint.

A Mass dedicated to the annual procession of the holy relics of St Oliver, as well as commemorating the 350th anniversary of his appointment as Archbishop of Armagh, took place before 100 pilgrims began their 100km trek.

Archbishop Eamon Martin celebrated the Mass on Sunday in St Peter’s Church in Drogheda, Co. Louth, opening a triduum of prayer across the Archdiocese of Armagh.

The statue of St Oliver was unveiled on Tuesday evening. It was commissioned by Archbishop Martin and cast in bronze by Dublin-sculptor Dony McManus.

The seven-foot high statue depicts St Oliver in the final moments of his earthly life.

The saint is in Ecce Homo pose with his hands bound behind his back.

Pictures from the unveiling may be seen at the website of the Archdiocese of Armagh, accompanied by Archbishop Eamon Martin's homily.

In other news from The Irish Catholic, an explanation for the delay in the cause of many Irish martyrs and news of the renewal of their cause at the diocesan level:

Ireland could be set to have 42 more martyrs recognised by the Church in the near future, with Archbishop Eamon Martin revealing that the process of readying their causes for submission to Rome is at “an advanced stage”.

Speaking to The Irish Catholic at Drogheda’s annual celebration of St Oliver Plunkett, Archbishop Martin said that while his 17th-Century predecessor is Ireland’s most famous martyr, Irish Catholics can look to the examples of many others who heroically gave their lives for the Faith. . . .

According to the Archdiocese of Dublin, which administers the Irish Martyrs Fund, after the beatification of 17 Irish martyrs in 1992 work continued on a second group of 42 martyrs and a positio – a dossier of documentation pertaining to them – was prepared in 1998. . . .

It appears, however, that the positio was never forwarded to the Vatican. Following the 2016 death of Msgr John Hanley, postulator of the martyrs’ causes, the positio was discovered in an examination of his papers.

“Just over two years ago, the papers were consigned to Archbishop Diarmuid Martin and they must be verified regarding their completeness by the relevant office of the Holy See,” a diocesan spokesperson said. “On completion of the examination the second phase of the process can be opened.”

The position contains 18 dossiers, covering 41 Irish people and one English Carmelite priest all killed between 1572 and 1655. The martyrs include 10 lay men and two lay women, with such individuals, Dr Martin said in Drogheda, being especially important examples for today’s Catholics.

St. Oliver Plunkett, pray for us! Holy martyrs of Ireland, pray for us!
Posted by Stephanie A. Mann at 12:30 AM

Email ThisBlogThis!Share to TwitterShare to FacebookShare to Pinterest
Labels: Archbishop of Armagh, Cause of the Irish Martyrs, Ireland, St. Oliver Plunkett