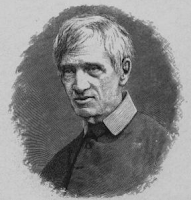 Now we know when Blessed John Henry Newman will be canonized: on Sunday, October 13, just a few days after his feast day, the date he became a Catholic. In view of this confirmation, we'll talk about the significance of this canonization, especially for those who've been devoted to Newman for years, or studied his life and works, explored his thought and prayed for this day.

What does it mean for me that Newman will be canonized a saint in about three months?

Through all the years that I've studied Newman and attended lectures about his life and works, his special care for the education and formation of the laity has been a highlight. His guidance for both the laity and the hierarchy should be studied and he should be venerated as a patron saint for the laity, especially in practical matters in administration: in the on-going crisis of trust in the Church today; in our parishes and schools; in all the lay organizations that work to influence our culture in so many ways, from apologetics to special causes.

I hope he is named a Doctor of the Church; like St. Thomas Aquinas in some ways, devotion to St. John Henry Newman can combine ongoing immersion in his works with continuing interest in his life and his personal expressions of faith. In his great works from the Parochial and Plain Sermons to the Grammar of Assent, Newman grappled with explaining the truths of the Catholic faith to a world that was not as certain as he was and the Church is that the world makes sense and God has created the world to make sense so we can have faith in Him and His Creation and Revelation. As he described in his Apologia Pro Vita Sua, he dedicated his life to the pursuit of holiness and doing God's will.

More tomorrow (including his influence on converts in his age and ours and the US based, EWTN influenced source of both miracles!).

Blessed--Saint--John Henry Newman, pray for us!
Posted by Stephanie A. Mann at 12:30 AM