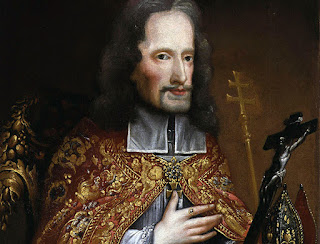 As I noted yesterday, I'll be on the Son Rise Morning Show this morning (about 7:50 a.m. Eastern/6:50 a.m. Central) to talk about St. Oliver Plunkett on his feast day, observed in Ireland. I wrote about him a couple of years ago for the National Catholic Register in the context of the "Fortnight for Freedom" the United States Conference of Catholic Bishops were promoting at that time. He was, as I noted yesterday, the last Catholic priest executed in England, but he was not a missionary priest in England nor a Jesuit, the main target of the so-called Popish Plot. He was the Catholic primate of Ireland and the Archbishop of Armagh. Like the English missionary priests he had prepared for the priesthood on the Continent.

Oliver Plunkett was born on All Saints Day in 1625 to a well-to-do Catholic family in County Meath, Ireland. He studied for the priesthood in Rome but did not return to Ireland when he was ordained in 1654 because the Church was being persecuted after Oliver Cromwell’s defeat of the Irish uprising after the English Civil War. Father Plunkett remained in Rome and taught Theology at the college of the Propaganda Fide; in 1669 he was appointed the Archbishop of Armagh and arrived in Ireland the next year.

As Archbishop he was able to revive the Church under the tolerant leniency of the English Lord Lieutenant of Ireland. He reformed the clergy, confirmed thousands of Catholics, built a Catholic college in Drogheda (which admitted Protestants), and served the Church with zeal. Then the Test Acts were passed by Parliament in England in 1673 and the short period of leniency was over in Ireland. James, the Duke of York had converted to Catholicism; he was his brother Charles II’s heir (Charles had many illegitimate sons by several mistresses but no surviving children from his Catholic wife, Catherine of Braganza). Archbishop Plunkett went into hiding and continued to serve his flock.

He was the ultimate bogey-man to the Anglicans of England, for he was the embodiment of Catholic resistance to English rule in Ireland and all the English attempts, from Elizabeth I's reign, to bring Catholic Ireland under Anglican rule. He was tried twice on charges of conspiracy against Charles II--once in Ireland where he was acquitted and again in England where he was found guilty. He could not be found guilty for being a priest in England under the old Elizabethan statute since he had been brought to England by authorities, and there was no real proof of any conspiracy with the French to overthrow Charles II, but he was still found guilty and the sentence carried out:

On the 1st July 1681, he was dragged on a sledge from Newgate prison, before a noisy crowd, a distance of three kilometers to Tyburn. The keeper of Newgate when asked how the prisoner was, replied that he had slept soundly and that he was as unconcerned as if he was going to a wedding. From the three cornered gallows at Tyburn, Archbishop Oliver in a prepared speech, refuted his accusers point by point and forgave all of them, including the judges, and those who had given evidence against him at the trial: "I beg of my Saviour to grant them true repentance, I do forgive them with all my heart."

Oliver's theme of reconciliation continued, by his asking forgiveness of all those whom he had ever offended by thought, word or deed. He prayed: "I beseech your Divine Majesty by the merits of Christ and the intercession of his Blessed Mother and all the holy angels and saints to forgive me my sins and to grant my soul eternal rest."

Kneeling he recited an act of contrition, the Miserere psalm and he repeated before his death, the prayer of Jesus on the cross: "Into Thy hands, O Lord, I commend my Spirit". St. Oliver worked tirelessly as Archbishop for ten years, paying the ultimate price of martyrdom without seeing the fruits of his labours, and his crowning glory was the manner of his death, humble, heroic and holy. Several priests were close by and they blessed and absolved him at the point of his death. He may have been already dead when he was taken down and the further mutilation began. A fire had been prepared to consume his remains, his head was thrown into it, but it was quickly recovered and scorch marks may still be discerned on the left cheek. His demeanour and his speech from the scaffold were well received and it was patently obvious to many that he was innocent, as the plot had already shown signs of crumbling.

Charles II knew that Archbishop Plunkett was being framed but he did nothing because it was not politically expedient to protect a Catholic priest from injustice. The Lord Lieutenant of Ireland and Earl of Essex, Arthur Capell, recognized the injustice of Plunkett's trial, conviction, and execution and Charles excoriated him: "his blood be on your head - you could have saved him but would not, I would save him and dare not".

After his martyrdom, St. Oliver's head was thrown into a fire and Catholics saved it. The head was taken to Rome and returned to Ireland 40 years later, kept safe in a Dominican convent in Drogheda until the 20th century. A new shrine was created in St. Peter's Church in Drogheda in 1995.

The Archdiocese of Armagh publishes this prayer:

Glorious Martyr, Oliver, who willingly gave your life for your faith, help us also to be strong in faith. May we be loyal like you to the See of Peter. By your intercession and example may all hatred and bitterness be banished from the hearts of Irish men and women. May the peace of Christ reign in our hearts, as it did in your heart, even at the moment of your death. Pray for us and for Ireland. Amen.

Later this month, on July 9th, the Archdiocese of Armagh will unveil a new statue of St. Oliver Plunkett in the Cathedral of St. Patrick "to honour the 350th anniversary of the appointment of St Oliver Plunkett as Archbishop of Armagh". I'll post an update after that date!