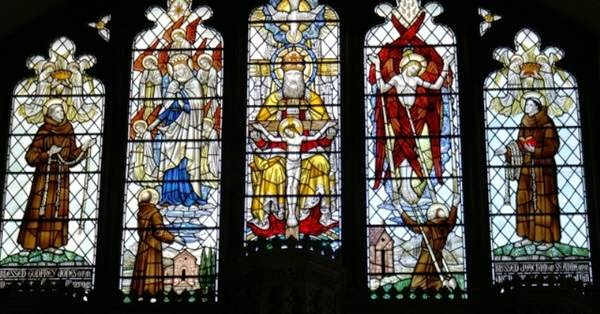 The Catholic Herald features St John Jones, one of the Forty Martyrs of England and Wales, in their latest issue. And he was from Wales, a Franciscan Friar who began his vocation during the reign of Mary I at Greenwich, went to the Continent and returned as a missionary priest:

John arrived in London towards the end of 1592 and laboured in different parts of the country. His brother Franciscans elected him their minister provincial.

In 1596 a spy told the priest-catcher Richard Topcliffe that John had visited two Catholics and celebrated Mass in their home. Although it was later revealed that the two Catholics were in prison at the time the Mass was alleged to have been celebrated, John was arrested, scourged and tortured. He was then imprisoned for two years.

On July 3 1598, John was tried on the charge of “going over the seas in the first year of Her Majesty’s reign [1558] and there being made a priest by the authority from Rome and then returning to England contrary to statute”. He was convicted of high treason and sentenced to be hanged, drawn and quartered.

His execution was delayed by an hour because his executioner forgot to bring the rope. He used the spare time to preach to the crowd and answer their questions. He was executed on what is now the Old Kent Road in south-east London. His dismembered body parts were fixed on top of poles on roads leading to Newington and Lambeth.

While he was imprisoned for two years, St. John Jones was able to help sustain the faith of St. John Rigby, a layman who had, while representing the daughter of his employer, confessed his own Catholic faith to authorities. Rigby was executed at St. Thomas Waterings, on the Old Kent Road (on the way to Canterbury) on June 21, 1600. The Franciscans of the Province in England remember several other martyrs on this date: St. John Wall, Blessed Thomas Bullaker, Blessed Henry Heath, Blessed Arthur Bell, Blessed John Woodcock, and Blessed Charles Meehan-Mahoney.

Image credit: Used by permission of the webmaster: A stained glass depiction of Franciscan Saints above the high altar [at the former Chilworth Friary of the Holy Ghost]: at the extreme left is Blessed John Jones, at the extreme right Blessed John Wall (also known as Joachim of St Anne), both of whom are now canonised Saints.
Posted by Stephanie A. Mann at 12:30 AM