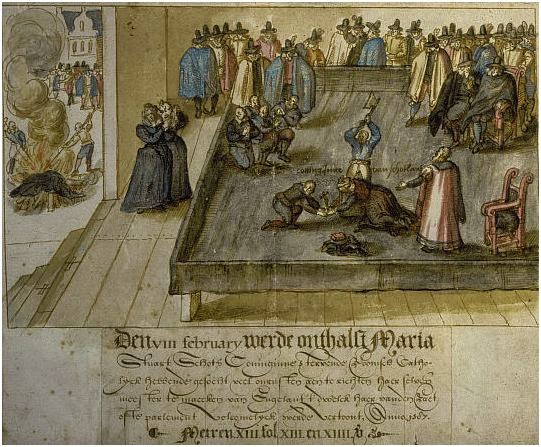 G.K. Chesterton wrote about our common images of Mary, Queen of Scots and Elizabeth, Queen of England (in his day there was only one Elizabeth!) in an essay titled "The Slavery of the Mind" in The Thing--we read this essay last night for our Wichita branch of the American Chesterton Society:

I could give many other examples of what I mean by this imaginative bondage. It is to be found in the strange superstition of making sacred figures out of certain historical characters; who must not be moved from their stiff symbolic attitudes. Even their bad qualities are sacred. Much new light has lately been thrown on Queen Elizabeth and Mary Stuart. It is not only favourable to Mary but on the whole favourable to Elizabeth. It seems pretty certain that Mary did not plot to kill Darnley. It seems highly probable that Elizabeth did not plot to kill Mary. But many people are quite as tenderly attached to the idea of a merciless Elizabeth as to that of a murderous Mary. That a man devoted to Protestantism should rejoice that Elizabeth succeeded, that a man devoted to Catholicism should wish that Mary had succeeded--all that would be perfectly natural and rational. But Elizabeth was not Protestantism; and it ought not to disturb anybody to discover that she was hardly a Protestant. It ought to be even less gratification to her supporters to insist that she was a tyrant. But there is a sort of waxwork history, that cannot be happy unless Elizabeth has an axe and Mary a dagger. This sense of fixed and sacred figures ought to belong to a religion; but a historical speculation is not a religion.

On her blog, Tea at Trianon, Elena Maria Vidal (author of the forthcoming The Paradise Tree and other historical novels), cites an article that argues for a new view of Mary, Queen of Scots:

The image of Mary which comes down to us through the biased lens of Protestant history is a classic case of ‘blaming the victim.’ The Whig historians of the British Empire depicted her as weak-willed and excessively romantic – so hopeless, in fact, that she ‘deserved’ her fate.

The real Mary Stuart, however, appears to unbiased eyes as guileless and forthright, clearly possessed of intelligence and character sufficient to survive a life rife with calamity – and still to keep her wits and charm about her.

Daughter of King James V of Scotland and Mary of Guise of France, Mary Stuart became Queen of Scotland at her father’s death. She was six days old. What followed were certainly her happiest years – her youth spent in the French court, educated by devoted French religious.

She was then married to the sickly Francis, son of Henry II and Catherine de Medici, whom she treated with kindness. His death two years later followed that of her own mother; she was eighteen years old.

Grieving her losses, Mary nevertheless stalwartly acknowledged her royal obligations, and left her merry France for dismal Scotland. It was a country engulfed in religious turmoil, with significant political opposition entrenched against her. The stern Puritans who followed John Knox made much of her elegant French wardrobe; she was said to have arrived with more than 20 lavish black gowns, the height of French fashion.

Regardless of their politics, however, the Scots were inevitably struck by Mary’s beauty, charm, sweetness of character and gentleness of spirit. An eyewitness relates that “In one of the … processions Mary was moving along with the rest, through a crowd of spectators, and the light from her torch fell upon her features and upon her hair in such a manner as to make her appear more beautiful than usual. A woman, standing there, pressed up nearer to her to view her more closely, and, seeing how beautiful she was, asked her if she was not an ‘angel’.

Chesterton would agree! How does he do that--I read something on-line and he's already written about it, and I just then happen to be reading about what he said about it!
Posted by Stephanie A. Mann at 1:00 AM