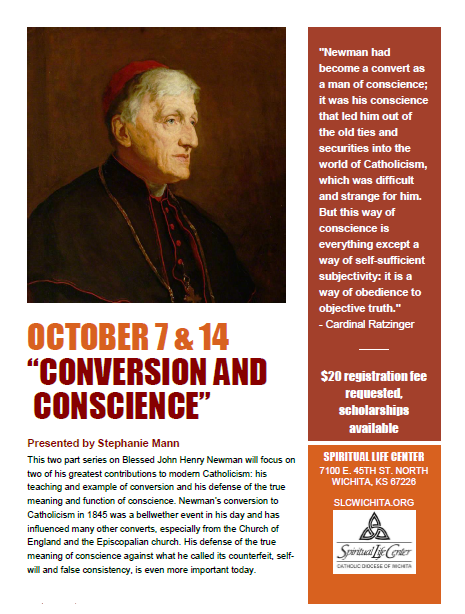 Just a reminder that I'll be presenting the first of two topics on Blessed John Henry Newman next Tuesday evening at the Spiritual Life Center in Wichita, Kansas. On Tuesday, October 7, from 7:00 to 8:30 p.m., I'll be discussing "Newman and Conversion".

While preparing for these classes--the second topic is Conscience--I found the perfect quotation from Joseph Cardinal Ratzinger (before he became Pope Benedict XVI) that demonstrates the connection between the two topics (quoted on the flyer):

Newman had become a convert as a man of conscience; it was his conscience that led him out of the old ties and securities into the world of Catholicism, which was difficult and strange for him. But this way of conscience is everything except a way of self-sufficient subjectivity: it is a way of obedience to objective truth.

Joseph Cardinal Ratzinger made this crucial comment in a presentation at a symposium sponsored by the International Centre of Newman Friends in the centenary year of Newman's death (1890-1990). He noted that Newman's teaching on conscience was so crucial to him after the Second World War and the fall of Hitler and the Nazi party:

We had experienced the claim of a totalitarian party, which understood itself as the fulfilment of history and which negated the conscience of the individual. One of its leaders had said: "I have no conscience. My conscience is Adolf Hitler". The appalling devastation of humanity that followed was before our eyes.

First, Ratzinger comments--much as Newman did in his own day--on our modern tendency to create opposition between conscience and authority:

For him, conscience stands on the side of subjectivity and is the expression of the freedom of the subject. Authority, on the other hand, appears to him as the constraint on, threat to and even the negation of, freedom. So then we must go deeper to recover a vision in which this kind of opposition does not obtain.

For Newman, the middle term which establishes the connection between authority and subjectivity is truth. I do not hesitate to say that truth is the central thought of Newman's intellectual grappling. Conscience is central for him because truth stands in the middle. To put it differently, the centrality of the concept conscience for Newman, is linked to the prior centrality of the concept truth and can only be understood from this vantage point.

That's why when Charles Kingsley attacked Newman with the claim that Newman had said that truth did not matter to Catholic priests, Newman had to respond so seriously and comprehensively to this falsehood. For someone to whom truth meant everything to be accused of condoning dishonestly was utterly unacceptable. When Kingsley would not retract his statement, Newman answered with his Apologia pro Vita Sua which truly made Kingsley's comment so patently absurd that Newman's spiritual autobiography now stands on its own, without the catalyst.

More about the series and information about registration at the Spiritual Life Center is here.
Posted by Stephanie A. Mann at 12:30 AM