The Real Tudors Exhibition and Review 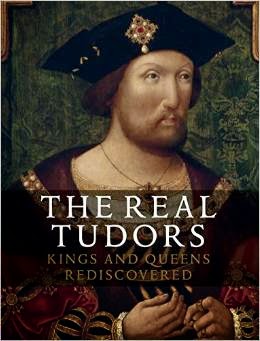 I mentioned this exhibition earlier this year. If you can't get to London year or Paris next year, you could order the book that accompanies the exhibition:

Who were the Tudor kings and queens and what did they really look like? Mention Henry VIII and the familiar image of the rotund, bearded fellow of Hans Holbein the Youngers portraits immediately springs to mind reinforced, perhaps, by memories of a monochromatic Charles Laughton wielding a chicken leg in a fanciful biopic. With Elizabeth I its frilly ruffs, white make-up and pink lips in fact, just as she appears in a number of very well-known portraits held in the Collection of the National Portrait Gallery in London. But the familiarity of these representations has overshadowed the other images of the Tudor monarchs that were produced throughout their reigns. During the sixteenth century the market for portraits grew and so the monarchs images multiplied as countless versions and copies of their likeness were produced to satisfy demand. Taken together, these images chart both the changing iconography of the ruler and the development of portrait painting in England. In considering the context in which these portraits were made, the motivations of the sitters and the artists who made them, the purposes to which they were put, and the physical transformations and interventions they have undergone in the intervening five centuries, the authors present a compelling and illuminating investigation into the portraiture of the Tudor monarchs.

This review contains the startling inaccuracy that Elizabeth I was "Britain's first female ruler"--startling because all of the biographical work completed in the past few years on Mary I, pointing out her role as the first queen regnant of England:

For all the political hurly burly, social change and religious upheaval of the Tudor period and the intriguing personal histories of its monarchs, it is surely the portraits of Henry VIII and Elizabeth I that have done most to secure the Tudors in popular imagination. I first saw a portrait of Elizabeth while at primary school and was enthralled by the startling contrast of red hair and pale skin, that impossibly tiny waist disappearing into a sharp V, the dress a marvel of engineering as much as couture and as extravagantly embellished as a little girl’s wildest imaginings could demand.

Far from the simpering pink princesses so beloved of little girls now, Elizabeth's image remains compelling because it achieves a feat unusual even in today’s liberated society, combining beauty and glamour with the hard edge of unassailable power. As Britain’s first female ruler, Elizabeth’s gender was a problem to be overcome, and her portraits trace the development of her image from demure princess to Virgin Queen. While her image remains within the traditional parameters of womanhood – elegant, sumptuously dressed and exhibiting a cool sort of beauty – her portraits suppress her sexuality entirely. By transcending gender she was able to assert her absolute authority and her divine right to rule. . . .

The notion of political unrest providing the stimulus for the production of portraits is a recurring one in the display, which is the result of a long-running NPG research project. Bringing together multiple portraits of the Tudor monarchs and combining technical analysis with art historical research, the curators have produced a wealth of evidence about techniques, workshop practices and the composition of individual paintings, evoking a buoyant art market doing a brisk trade in royal portraits. In dangerous and uncertain times, displaying a portrait of the king must have seemed a sensible precaution, and the political turmoil caused by Henry VIII’s break with Rome seems likely to have fuelled the growing appetite for his image.

The website for the exhibition provides lots of background and samples of the works on display.
Posted by Stephanie A. Mann at 12:30 AM