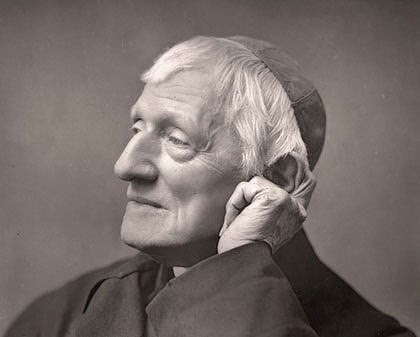 I'll be presenting a two part series on Blessed John Henry Newman on Conversion and Conscience:

This two part series on Blessed John Henry Newman will focus on two of his greatest contributions to modern Catholicism: his teaching and example of conversion and his defense of the true meaning and function of conscience. Newman's conversion to Catholicism in 1845 was a bellwether event in his day and has influenced many other converts, especially from the Church of England and the Episcopalian church. His defense of the true meaning of conscience against what he called its counterfeit, self-will and false consistency, is even more important today. By highlighting Newman's conversion and conscience, the series will explore Newman's guidance for the New Evangelization and the laity's great role in spreading the Good News of Jesus Christ and His Church.

Our diocesan newspaper, The Catholic Advance, published a story to announce my presentation:


Stephanie A. Mann, a member of the Diocese of Wichita’s Speaker’s Bureau, will address two of the greatest themes of Blessed John Henry Newman’s pastoral care in a two part series from 7 to 8:30 p.m. Oct. 7 and 14 at the Spiritual Life Center.
When Pope Emeritus Benedict XVI beatified Newman on Sept. 10, 2010, in Birmingham, England, he paid tribute to Newman’s intellectual legacy, but also emphasized his pastoral concern and care for the poor.
“Newman received many letters from Anglicans or members of other churches in England, asking for advice about becoming a Catholic,” Mann said. “He counseled them on how to deal with family and friends opposed to their joining the Catholic Church; he answered questions about doctrine, history, and devotion – Newman helped many, using his own experience as a convert.”
Blessed John Henry Newman also helped Catholics facing concerns in 19th century England after the doctrine of papal infallibility was defined at the First Vatican Council. English politicians proclaimed that Catholics could not be good citizens if they obeyed the pope.
“Former Prime Minister William Gladstone said that Catholics would have to follow their own consciences and ignore the pope to be true citizens of England” Mann said. “Newman wrote a public letter to a famous Catholic, the Duke of Norfolk, to explain that an individual conscience, rightly formed, cannot conflict with papal teaching on matters of faith and morals.”
Dusty Gates, assistant program director at the Spiritual Life Center, said, “This series will show how Blessed John Henry Newman models two great aspects of the New Evangelization: the path of conversion and the formation of an obedient conscience. From the 19th century until today, he guides us to become holy disciples of Our Lord, spreading the Good News in a world that needs to hear Him so much.”
Want to participate?The series about Blessed John Henry Newman will be offered at the Spiritual Life Center on Tuesdays, Oct. 7 and 14. The cost for the series is $20. Register at www.SLCWichita.org or by calling (316) 744-0167.

I think I'll be relying quite a bit on Pope Emeritus Benedict XVI in my preparation for these presentations. His appreciation of Blessed John Henry Newman's conversion and teaching on conscience is thoughtful and elegant. People like stories about converts and Newman's conversion story is so influential. People need to know more about what conscience really is instead of the counterfeit that we too often accept today--for those two reasons I hope that many in the Wichita area will attend these presentations.The Spiritual Life Center may--GASP--videotape their courses too.

Please use the sharing buttons and help me get the word out about this presentation. Thank you!
Posted by Stephanie A. Mann at 12:30 AM