A Catholic Colony Before Maryland 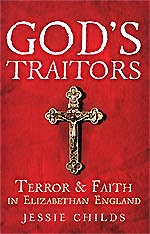 Jessie Childs writes on the OUPBlog about an idea to found a colony in the New World to provide religious freedom to English Catholics during the reign of Elizabeth I:

Over the summer of 1582 a group of English Catholic gentlemen met to hammer out their plans for a colony in North America — not Roanoke Island, Sir Walter Raleigh’s settlement of 1585, but Norumbega in present-day New England.

The scheme was promoted by two knights of the realm, Sir George Peckham and Sir Thomas Gerard, and it attracted several wealthy backers, including a gentleman from the midlands called Sir William Catesby. In the list of articles drafted in June 1582, Catesby agreed to be an Associate. In return for putting up £100 and ten men for the first voyage (forty for the next), he was promised a seignory of 10,000 acres and election to one of “the chief offices in government”. Special privileges would be extended to “encourage women to go on the voyage” and according to Bernardino de Mendoza, the Spanish ambassador in London, the settlers would “live in those parts with freedom of conscience.”

Religious liberty was important for these English Catholics because they didn’t have it at home. The Mass was banned, their priests were outlawed and, since 1571, even the possession of personal devotional items, like rosaries, was considered suspect. In November 1581, Catesby was fined 1,000 marks (£666) and imprisoned in the Fleet for allegedly harboring the Jesuit missionary priest, Edmund Campion, who was executed in December.

William Catesby's son Robert would lead the Gunpowder plotters in 1605:

Seven years later, in the reign of the next monarch James I (James VI of Scotland), William’s son Robert became what we would today call a terrorist. Frustrated, angry and “beside himself with mindless fanaticism,” he contrived to blow up the king and the House of Lords at the state opening of Parliament on 5 November 1605. “The nature of the disease,” he told his recruits, “required so sharp a remedy.” The plot was discovered and anti-popery became ever more entrenched in English culture. Only in 2013 was the constitution weeded of a clause that insisted that royal heirs who married Catholics were excluded from the line of succession.

Every 5 November, we British set off our fireworks and let our children foam with marshmallow, and we enjoy “bonfire night” as a bit of harmless fun, without really thinking about why the plotters sought their “sharp remedy” or, indeed, about the tragedy of the father’s failed American Dream, a dream for religious freedom that was twisted out of all recognition by the son.
Posted by Stephanie A. Mann at 12:30 AM