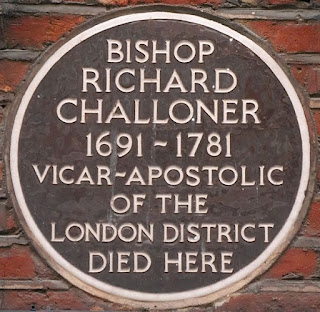 Richard Challoner, Vicar Apostolic for the London District in England, died on January 12, 1781. The Vicar Apostolic structure provided support for Catholic priests and laity in England in the seventeenth, eighteenth, and nineteenth centuries until the Restoration of the Hierarchy in 1850.

Born on September 29, 1691, he was raised a Presbyterian until after his father died when his mother became a servant in a Catholic household. Then he was raised Catholic and was baptized when he was thirteen. He entered the English College in Douai in 1705 and remained there until he returned to England in 1730. Challoner was ordained a priest in 1716 and served as an administrator at Douai for many years until becoming a missionary priest in London among the poor; although the recusancy laws were not as strictly enforced at that time, Father Challoner was still disguised as a layman and was careful not to attract official attention the the Masses and other Sacraments he celebrated in all kinds of locations.

In 1728 he had published his first work, Think Well on It. William Hyland discusses his many other published works in this Touchstone article.

Among his works, including a revision of the Douai-Rheims Bible and several devotional books, I think his most interesting were the historical and hagiographical efforts--books on the Anglo-Saxon and Medieval saints and especially on the Catholics martyrs who suffered in England from the reign of Henry VIII to that of Charles II. Those works provided the tiny minority of Catholics in England a vision of their past and indeed of its glories. In their own age they were nearly forgotten and quite ignored--not even worth persecuting!

Strangely enough, that latter condition changed after Parliament passed the Catholic Relief Act of 1778. Lord Gordon, President of the Protestant Association enraged the mobs so in 1780 that various No Popery riots took place (as recounted in Charles Dickens' Barnaby Rudge), as well as a march on Parliament, leading to many arrests and executions. The mobs also attacked the Embassy buildings of Bavaria and Sardinia, as well as the homes of wealthy noble Catholics. Bishop Challoner, aged 89, had to hide--just like a 16th century priest of old--until the mobs left his London home. The shock and terror of that near escape was too much for him. Bishop Challoner suffered paralysis two days before his death.

He was succeeded as Vicar Apostolic by his Coadjutor James Talbot; the last to hold that title was Nicholas Wiseman, who became the first Archbishop of Westminster in 1850.

By divine providence, Richard Challoner served the Catholics in England for fifty years at a period when the penalized Church was slowly losing ground; many had become disheartened and the prospects of recovery were more than doubtful. Challoner's numerous publications are the chief achievements that now bring him before us, but, as Bishop John Milner noted in his funeral discourse in January 1781: `If it were not known how assiduous he ever was in the discharge of his sacred functions, and how much of his time was constantly taken up with preaching, instructing, administering the sacraments, attending to the various and intricate concerns of his district, and with his prayers and devotions, we might be led to imagine that he had done nothing else but write, and that his whole life had been devoted to the composition of the many works he has left us in defence of the true faith and of sound morality.'

It was by this twofold apostolate — his pastoral care and his writings — that he sustained the faith of his flock when they sorely needed encouragement to persevere. At the end of his life he saw the first step taken towards emancipation, and it was undoubtedly his decisive approval that made it possible for that step to be taken; had he insisted on consultation with Rome at every stage, the opportunity would have been lost by the inevitably long-drawnout exchanges of opinion. Yet it remains true to say that it was by his books that his influence was most effective, far beyond his own District, and, indeed, among non-Catholics as well. The Garden of the Soul and his Meditations, as well as other publications, were, as we have seen, frequently reprinted up to the early years of this century. His Missionary Priests gave Catholics a pride in their ancestry and showed them patterns of endurance under persecution. His revision of the Douay Bible was for two centuries the Bible known to Catholics.

For his contemporaries there was a third influence — his holy life. To quote Bishop Milner again: `When I represent Bishop Challoner as a saint, I say no more of him now after his death, than all who knew him have said of him during his life.'

The school that bears his name in Kingston upon Thames includes this prayer for his beatification in their documentation:

O God who made your servant Richard a true and faithful pastor of your little flock in England, raise him, we beseech you, to the altars of thy Church, that we, who have been taught by his word and example, may invoke his name in heaven for the return of our country to belief in the Gospel and to the unity of all Christians in the one Church of Jesus Christ. We ask this through the same Christ our Lord. Amen.

Image credit: "Blue" plaque outside Challoner's London home at 44 Old Gloucester Street, from Wikipedia commons, used by permission of the photographer.
Posted by Stephanie A. Mann at 12:30 AM