The Chapel Royal and The Martyrs' Remains 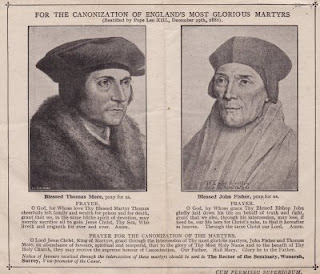 Early next month, another concert of Tudor church music (through the modern era) in another Chapel Royal, Saint Peter ad Vincula, at the Tower of London, celebrating five hundred of "royal" music:

In this historic and intimate Chapel, nestled in the shadow of the Tower of London’s mighty White Tower, the acclaimed Choir of the Chapels Royal, HM Tower of London, directed by Colm Carey will perform works from Tudor times through to the modern day, including works by Byrd, Parry and Handel.

The Tower of London is one of the world’s most famous fortresses, and one of Britain’s most visited historic sites. In the shadow of the great White Tower stands a small chapel, constructed on the orders of King Henry VIII around 1515.

Now known as the Chapel Royal of St Peter ad Vincula this ecclesiastical gem has been a place of worship for royalty, residents of the Tower and condemned prisoners for the past 500 years. It is the final resting place of three queens of England, as well as Thomas More and John Fisher.

The intimacy and atmosphere of this historic Chapel provides a unique platform on which to experience music making. The Chapel Royal has always been associated with the finest music and finest musicians, and this concert celebrates 500 years of royal composers, from Tudor times through to the 20th century.

"It is the final resting place of three queens of England, as well as Thomas More and John Fisher." That sentence from the announcement gave me pause:

Shouldn't Saint John Fisher be resting in a Catholic church (St. John Fisher in Rochester) or cathedral, like the Cathedral of St. George in the Diocese of Southwark (since the Catholic diocese of Rochester was suppressed after its last ordinary, Maurice Griffith died in 1558)? If his remains were buried there in an appropriate tomb, Catholics would be able to pay homage to him without paying admission to the Tower of London!

Shouldn't Saint Thomas More be resting in the Catholic church near Chelsea (Our Holy Redeemer and St. Thomas More), for the same reason? Catholics shouldn't have to try to visit an Anglican church in Canterbury (his head is entombed with the Roper family at St. Dunstan's  or pay admission to the Tower of London to visit the tomb of this great saint!

I think Saint John Fisher and Saint Thomas More should be reclaimed from the Church of England and the Chapel Royal of the monarch! What do you think?
Posted by Stephanie A. Mann at 12:30 AM