News About Walsingham and Canterbury

In The National Catholic Register, Joanna Bogle writes about the honor given to the Catholic shrine of Our Lady of Walsingham:

Pope Francis has declared Walsingham a minor basilica. It was a dramatic scene, as Bishop Alan Hopes of East Anglia made the announcement at Mass on the feast of the Holy Family in Walsingham, reading aloud a Latin document from Rome.

Applause broke out as, with a sweep of his arms, he included the large modern church, the domain with its Stations of the Cross and the medieval Slipper Chapel, and announced, “All of this is now a minor basilica!”

The rector, Msgr. John Armitage, said that this wonderful news was a tribute to all the people who have worked and prayed at Walsingham over the years, as well as the pilgrims who have come in large numbers from across Britain. “It represents so much of what has been happening in the shrine for so long,” Msgr. Armitage said. “It’s a recognition by the Holy Father of the long history of this shrine. This is a rare privilege, and it says so much for Walsingham and for the great heart and witness of so many people. This is about history, and faith, and everything that makes up Walsingham.”

More here, including a video of the announcement, read first in Latin, from the shrine website. 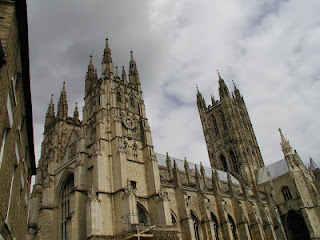 There's also the news that pilgrims from Hungary will be on pilgrimage to Canterbury this May, bringing relics of St. Thomas a Becket to the site of his martyrdom. From the Hungarian Embassy in London, comes this announcement from Ambassador Péter Szabadhegy:

His Excellency informed the press that in a joint initiative with the Church of England and the Catholic Church of England and Wales, the Embassy of Hungary would bring the relic of St. Thomas Becket having kept in Esztergom/Hungary to the United Kingdom. As an important part of the set of events, a Holy Mass at Westminster Cathedral will be celebrated on 23 May by Cardinal Péter Erdő, Primate of Hungary, Archbishop of Esztergom-Budapest and Cardinal Vincent Nichols, Archbishop of Westminster, in the presence of János Áder, President of Hungary and Archbishop Justin Welby, Archbishop of Canterbury.

During the ‘Becket-week’, the relic from Esztergom will be displayed and celebrated together with other rare relics of St. Thomas at Westminster Abbey, the Houses of Parliament, Lambeth Palace and Mercer’s Chapel. At the end of the week, the relics will be transferred to Rochester Cathedral and to Canterbury Cathedral.

The Ambassador underlined that this would be the first time for the British public to have the opportunity to see the relic of St. Thomas Becket, having been kept with great reverence in Esztergom/Hungary for 800 years. The relic represents the deep and manifold historical and cultural links between Hungary and the UK.

The Telegraph offers some background on how the relic came to Hungary and also notes why St. Thomas a Becket was so honored there:

More recently, the relic took on added significance in Hungary as the focal point of a renewed cult of the saint which grew up under Communism as a symbol of resistance to over-mighty state.

The Hungarian Ambassador, Péter Szabadhegy, said Becket is revered in his country as “representative of the struggle of the church against repression for religious liberty”. . . .

It is traditionally held that the surviving relic in Hungary was acquired by Cardinal Lukács Bánffy, a friend of Becket’s from their student days in Paris, who went on to become Archbishop of Esztergom.

But is also thought possible that Margaret of France, who spent much of her life in England as wife of Henry II’s son, known as the “young King”, but was widowed and went on to become Queen of Hungary. Becket negotiated the marriage pact which brought her to England and would have been a major influence on her life.

Poor Henry VIII; all his good work being undone! Deo Gratias!
Posted by Stephanie A. Mann at 12:30 AM