Venerable Mary Ward: Ahead of Her Time 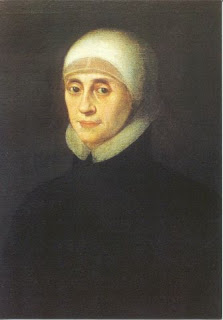 Mary Ward, English nun and recusant, died on January 30, 1645. She was declared Venerable by Pope Benedict XVI in 2009, according to this news release from the Sisters of Loretto:

On 19th December 2009 His Holiness Benedict XVI formally promulgated the Decree recognising the ‘heroic virtue’ demonstrated by Mary Ward and thereby conferring on her the title ‘Venerable’. Her cause will now go forward to the next stage in the process towards beatification and eventual canonization.

Mary Ward (1585-1645) was an Englishwoman from Yorkshire who felt called by God to found a congregation of apostolic, non-enclosed religious women along the model of the Society of Jesus. She spent many years in Rome petitioning the Pope to recognise her new congregation, but in 1631 her order was suppressed and Mary Ward herself accused of heresy. No charges were ever brought but she remained under the shadow of the Inquisition in Rome and her congregation was disbanded. Mary Ward’s ideal of an active congregation of religious women serving the needs of the Church was too advanced for her time. She suffered at the hands of authorities who in different circumstances might have recognised the need for such a congregation. Only in 1877 was her congregation recognised by the Church and only in 1909 was Mary Ward allowed to be named as foundress.

The cause for Mary Ward’s canonization was opened in 1929. The historical research was begun by Fr Grisar SJ and completed by Sr Immolata Wetter CJ accompanied by the Postulator Fr Paul Molinari SJ and the Relator Fr Peter Gumpel SJ. This was accepted by the Congregation for the Causes of Saints in 1995. The theologians completed their investigation in May 2009 and recommended unanimously that Mary Ward demonstrated ‘heroic virtue’ and that her cause should go forward. This was confirmed by the commission of Cardinals and Bishops in November 2009 and subsequently by the Pope.

This essay, by Laurence Lux-Sterritt, published in the Revue de L'Histoire des Religions (vol. 225) in 2008 (see full citation below) explains why Mary Ward's vocation to found an order for women modeled on St. Ignatius of Loyola's Society of Jesus was so fraught with difficulty. It wasn't just that she wanted to form an active, not cloistered, order for women, but that she was using the Jesuits as a model. The entire essay is fascinating in its exploration of the propaganda for and against the Jesuits inside and outside of the Church. The author summarizes the issues thus:

Mary Ward’s institute would fall victim to the complexity of the religious context in which it was born. In the post-Tridentine Church, in which historian Elizabeth Rapley observes “a growing male-female dichotomy, an aggressive antifeminism, an irresistible trend towards patriarchy,”[48] Elizabeth Rapley, The Dévotes: Women and Church in...[48] the Institute of English Ladies was condemned as a new female order that was thought both unacceptable and absurd. But this simple opposition, which was encountered by a number of new feminine movements in the seventeenth century, was exacerbated by the predicament of a more political nature. Specifically, for the Church—torn by the strife that set the secular clergy against the Jesuits—Mary Ward was living proof of the ascendancy that the Society of Jesus enjoyed among devoted Catholics of the period. Besides its contempt for the monastic tradition, the mission of the institute gave the Jesuits no small advantage by entrusting them with the guidance of newly converted families. In the context of the 1620s, such a congregation was bound to incur the disapproval of the enemies of the Society of Jesus.

That was why, in September 1630, the Church ordered the nuncio Pierluigi Carafa to interrogate seven members of the institute at their community in Liege.[49] Wetter, Mary Ward, 38–59.[49] The transcript of the hearing was sent to Rome and studied by Francesco Ingoli, secretary of Propaganda Fide, who was overtly hostile to the Jesuits. He condemned the institute in his report and called for punitive measures. After the deliberations in the congregation, November 21, 1630, Urban VIII remitted the affair to the Inquisition, which decided, in February 1631, to imprison Mary Ward in Munich. The axe fell a little later, when Urban VIII declared the suppression of the so-called “Jesuitesses” in the bull Pastoralis Romani Pontificis. Mary Ward was declared a heretic, and her institute was reduced to the status of a sect in violation of female decency and the prerogatives of the clergy. The supreme pontiff hoped to eradicate “these plants hurtful to the Church.” He ordered they should be “pulled up by the roots, andextirpated”[50] National Library of France, Z Thoisy, 312, items related...[50] since, according to him, the English Ladies threatened the established order far more than they preserved it.

After her release, Mary Ward retired to England where she continued to serve the recusant community with some of her sisters in a private capacity; she died in Yorkshire in 1645. The institute, however, survived thanks to the elector of Bavaria, Maximilian I (1573–1651), who permitted the English Ladies stationed in Munich to continue to teach, on the strict condition that they no longer claim to be a religious order.[51] See Peters, Mary Ward, 594–97.[51] It was from Munich that renewed effort to obtain papal approval was made. This new institute focused on the instruction of girls, observed enclosure, and did not claim any missionary vocation; it officially had nothing to do with the institute founded by Mary Ward and suppressed in 1631. In 1749, in the bull Quamvis Justo, Benedict XIV recognized it under the name of the Institute of the Blessed Virgin Mary. Not until June 7, 2003 (nearly four centuries after Mary Ward claimed to have received the divine command “Take the same of the Society”), did the Church permit the vocation of the founder to exist as she would have liked by adapting the rules of Ignatius of Loyola to a congregation of women, who were at last given the right to bear the name Congregation of Jesus.[52] I thank Sophie Houdard (Université de Paris III - Sorbonne...[52]