The Tudor Rose and the Wars of the Roses 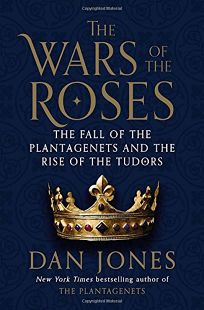 From the BBC History Magazine, Dan Jones wonders if the dynastic battles called "the Wars of the Roses" were the creation of the victorious Tudor dynasty:

In England, the 14th century ended badly – with regicide. Richard II, having been deposed by his cousin, Henry Bolingbroke, was murdered in prison during the early days of 1400. The usurper Henry IV endured a troubled reign, but his son, Henry V, achieved stunning successes in the wars with France – notably the battle of Agincourt in 1415 and the treaty of Troyes in 1420, by which Henry V laid claim to the French crown for his descendants.

But in 1422 Henry V died of dysentery. His heir was a nine-month-old son, Henry VI, whose birthright – the dual monarchy – required the men around him both to pursue an expensive defensive war in France and also to keep order in an England that was fairly groaning with dukes, earls and bishops of royal blood. Disaster surely loomed.

Or did it? It is often assumed that the Wars of the Roses began simply because, by the 15th century, there were too many men of royal blood clustering around the crown, vying for power and influence over a weak-willed king. Yet if that were the case, civil war would have broken out straight after Henry V’s death. The baby king was watched over by two charismatic and extremely ‘royal’ uncles, John, Duke of Bedford, and Humphrey, Duke of Gloucester. In addition, many more adult relatives of royal descent were expecting a stake in power, including Cardinal Henry Beaufort, bishop of Winchester, who maintained a bitter feud with Gloucester.

Yet the 1420s saw no serious unrest. Rather than fighting one another, the English nobles showed a remarkable unity of purpose at the moment of greatest royal weakness. They did not hive off into dynastic factions, but stuck together, kept the peace and attempted to preserve a normal system of royal government. Even when men came to blows, as Beaufort and Humphrey did in 1424, the violence was quickly stopped and the protagonists reprimanded. There were no roses. There was no blood. And this peace lasted a long time.

Jessie Childs reviewed Dan Jones' book-length treatment of this story, which in the U.K. edition had the title, The Hollow Crown, for The Telegraph in 2014:

The Hollow Crown is exhilarating, epic, blood-and-roses history. There are battles fought in snowstorms, beheadings, jousts, clandestine marriages, spurious genealogies, flashes of chivalry and streaks of pure malevolence. There is a “Parliament of Devils”, a “Bloody Meadow”, a “Red Gutter” and even a “Love Day”: Henry’s bizarre attempt to reconcile Beauforts and Percys with York and the Nevilles by having them process, arm in arm, through the streets of London. Jones’s material is thrilling, but it is quite a task to sift, select, structure and contextualise the information. There is fine scholarly intuition on display here and a mastery of the grand narrative; it is a supremely skilful piece of storytelling.

Jones takes the story beyond the Battle of Bosworth of 1485 and the burial of the king in the car park. Despite his victory over Richard III, Henry VII was acutely aware of the frailty of his bloodline and terrified of a Yorkist revival. The Tudor rose was one way of shoring up his position. No matter that the red rose of Lancaster was pretty much a Tudor device: it could be scribbled, retrospectively, into the old scrolls. The conjoined red and white rose gave parity and victory to the Tudors, along with a sense of an ending: “Now civil wounds are stopp’d; peace lives again,” (Richard III, act five, scene eight).

In reality, the blood of the Wars of the Roses seeped into the Tudor tapestry. Pretenders were exterminated and in 1541 Margaret Pole, the 67-year-old niece of Edward IV and Richard III, was hacked to death by an amateur executioner. Soon afterwards, one of her grandsons disappeared in the Tower of London just as her cousins, “the princes in the Tower”, had also faded from sight.

It is often wondered why Sir Thomas More did not finish his History of King Richard III. One theory is that he grew uncomfortable with the Tudor version. “These matters,” he wrote, “be kings’ games, as it were, stage plays, and for the more part played upon scaffolds.” Wise men, he added, “will meddle no further”.
Posted by Stephanie A. Mann at 12:30 AM