Charles Dickens and the Gordon Riots 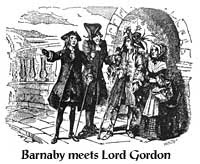 Charles Dickens' 200th birthday was celebrated yesterday, February 7. Among Dickens' many, many works is one rather unusual historical novel, Barnaby Rudge, concerning the Gordon Riots--those anti-Catholic disturbances that followed the first steps of emancipating Catholics in England. There are two interesting features of this novel: one that Dickens wasn't really that interested in history and the other that Dickens really had no sympathy for the Catholics attacked during the Gordon Riots!

As to the first feature: Chesterton commented on Dickens writing two historical novels (A Tale of Two Cities and Barnaby Rudge) while not knowing anything or caring about history:

But it is very typical of Dickens's living interest in his own time, that though he wrote two historical novels they were neither of them of very ancient history. They were both, indeed, of very recent history; only they were those parts of recent history which were specially picturesque. I do not think that this was due to any mere consciousness on his part that he knew no history. Undoubtedly he knew no history; and he may or may not have been conscious of the fact. But the consciousness did not prevent him from writing a History of England. Nor did it prevent him from interlarding all or any of his works with tales of the pictorial past, such as the tale of the broken swords in Master Humphrey's Clock, or the indefensibly delightful nightmare of the lady in the stage-coach, which helps to soften the amiable end of Pickwick. Neither, worst of all, did it prevent him from dogmatising anywhere and everywhere about the past, of which he knew nothing; it did not prevent him from telling the bells to tell Trotty Veck that the Middle Ages were a failure, nor from solemnly declaring that the best thing that the mediæval monks ever did was to create the mean and snobbish quietude of a modern cathedral city. No, it was not historical reverence that held him back from dealing with the remote past; but rather something much better -- a living interest in the living century in which he was born. He would have thought himself quite intellectually capable of writing a novel about the Council of Trent or the First Crusade. He would have thought himself quite equal to analysing the psychology of Abelard or giving a bright, satiric sketch of St. Augustine. It must frankly be confessed that it was not a sense of his own unworthiness that held him back; I fear it was rather a sense of St. Augustine's unworthiness. He could not see the point of any history before the first slow swell of the French Revolution. He could understand the revolutions of the eighteenth century; all the other revolutions of history (so many and so splendid) were unmeaning to him. But the revolutions of the eighteenth century he did understand; and to them therefore he went back, as all historical novelists go back, in search of the picturesque. And from this fact an important result follows,

The result that follows is this: that his only two historical novels are both tales of revolutions -- of eighteenth-century revolutions. These two eighteenth-century revolutions may seem to differ, and perhaps do differ in everything except in being revolutions and of the eighteenth century. The French Revolution, which is the theme of A Tale of Two Cities, was a revolt in favour of all that is now called enlightenment and liberation. The great Gordon Riot, which is the theme of Barnaby Rudge, was a revolt in favour of something which would now be called mere ignorant and obscurantist Protestantism. Nevertheless both belonged more typically to the age out of which Dickens came -- the great sceptical and yet creative eighteenth century of Europe. Whether the mob rose on the right side or the wrong they both belonged to the time in which a mob could rise, in which a mob could conquer. No growth of intellectual science or of moral cowardice had made it impossible to fight in the streets, whether for the republic or for the Bible. If we wish to know what was the real link, existing actually in ultimate truth, existing unconsciously in Dickens's mind, which connected the Gordon Riots with the French Revolution, the link may be defined though not with any great adequacy. The nearest and truest way of stating it is that neither of the two could possibly happen in Fleet Street to-morrow evening.

As to the second feature, Dickens commented on his sympathies in the preface:

"However imperfectly those disturbances [the 1780 riots] are set forth in the following pages, they are impartially painted by one who has no sympathy with the Romish Church, though he acknowledges as most men do, some esteemed friends among the followers of its creed."

As I read the book a couple of years ago, I realized that Dickens' sympathies are against the anti-Catholics, not for the Catholics. The same pattern occurs in A Tale of Two Cities: Dickens is not for the aristocrats slaughtered at the guillotine; he is against the injustice of the execution of Charles Darney and revenge that furthers the suffering of Dr. Manette and Lucy. To Dickens, the Catholic and the aristocrat are foreign and unknown, but he still cannot stand to see them unjustly treated. Although his natural sympathies are for the mob and not for the Catholics or the aristocrat abused by the mob, he still has to reveal the horror of the mob's cruelty--just as much as he exposed the cruelty of the Marquis d'Evremonde and lacked sympathy for the "Romish creed", even though he had friends who were Catholics!

Peter Ackroyd describes this idea to a certain extent in his analysis of Barnaby Rudge:

The Gordon riots were the single most important threat to Parliament, and to the authorities of London, in the city's history. They began as a protest against the Catholic Relief Act of 1778, in which Roman Catholics were relieved of certain historical penalties. But under the leadership of Lord George Gordon the first protests quickly turned into a form of mob rule, in which Parliament was invaded and the prison of Newgate burned to the ground. For a few days London was at the mercy of the populace.

Dickens was always interested in the behaviour of the London crowd. He knew its volatility at first hand, having been brought up in its shadow. Just a year before he began Barnaby Rudge he attended the public hanging of a murderer, François Benjamin Courvoisier, and noted of the mob gathered on that occasion that there was "nothing but ribaldry, debauchery, levity, drunkenness and flaunting vice in fifty other shapes". These were scenes that he recreated in the novel. Even as he was writing it there were rumours of Chartist uprisings in the heart of the city. Two years before there had been street battles in Birmingham and in Newport.

Dickens was a radical by instinct, if not by judgment, and he always manifested a signal dislike or suspicion of authority in all its forms. Yet he was too capacious a novelist to take a single or unambiguous attitude towards the events he was describing.

At any rate, belated happy birthday, Charles Dickens!
Posted by Stephanie A. Mann at 2:21 AM