These events appear in the news every so often, when Catholic services (the Mass, the Divine Office, etc) are celebrated in formerly Catholic churches and chapels at the invitation of Anglican officials. From the Hampton Court Chapel website:

This historic service of Vespers in King Henry VIII’s chapel will be celebrated by His Eminence Cardinal Vincent Nichols and will include a sermon from The Rt Revd and Rt Hon Dr Richard Chartres, KCVO, Bishop of London and Dean of Her Majesty’s Chapels Royal – an unprecedented coming together of the Catholic and Anglican churches on such an historically important site.

Celebrated mostly in Latin, another first in over 450 years, Vespers will be dedicated to St John the Baptist as the Chapel Royal was built by Cardinal Wolsey on the site of a chapel of the Knights of St John Hospitaller, dedicated to that Saint.

Members of the public will have the chance to attend this service through a free ballot.

The musical element of the service has been chosen and will be performed by Harry Christophers and his ensembles The Sixteen and Genesis Sixteen. Paying tribute to the rich and turbulent religious history of the Chapel Royal, the ensembles will sing ThomasTallis’ Magnificat, William Cornysh’s Salve Regina and John Taverner’s ‘Leroy’ Kyrie.

The composers chosen are historically significant according to the news release:

Both Cornyshe and Tallis were Gentlemen of the Chapel Royal.

Thomas Tallis was a Gentleman of the Chapel Royal and served in the royal household under Henry VIII, Edward VI, Mary Tudor and Elizabeth I. Tallis avoided religious controversies, though he stayed an "unreformed Roman Catholic" under four consecutive monarchs. 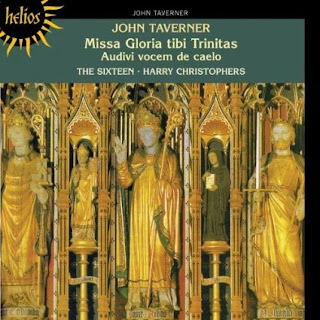 John Taverner was Henry VIII’s chief minister and in 1538 Taverner supervised the demolition and burning of the rood screen in Boston parish church as a result of reformation activities. His Leroy Kyrie takes its name from a tune called “Leroy” which appears in many Tudor manuscripts. It is most likely that one of the C15th kings composed it, most probably Henry IV or V being “Le Roi”.

I'm not sure what the reference to John Taverner as "Henry VIII's chief minister" means: he was a choirmaster and a lay clerk, according to the Encyclopedia Britannica:

In 1526 Taverner went to the University of Oxford to become master of the choir in the chapel of Cardinal College (later Christ Church). He left Oxford in 1530 to serve as a lay clerk in St. Boltoph choir in Boston, England, where he may have taken up the position of chorister instructor. However, by 1537 he had ended his association with the choir, at which time he may have retired from employment in church music altogether. The allegation that he served as a paid agent of Thomas Cromwell in Henry VIII’s suppression of English monasteries cannot be verified.

Taverner’s church music, which is printed in Tudor Church Music, volumes 1 and 3 (1923–24), shows a variety, skill, range, and power that represent the climax of pre-Reformation English music. It includes 8 masses (e.g., The Western Wind), a few mass movements, 3 Magnificats, a Te Deum, and 28 motets. Taverner’s adaptation of the musical setting of the words In nomine Domini from the Benedictus of his mass Gloria tibi Trinitas became the prototype for a large number of instrumental compositions known as In nomines, or Gloria tibi Trinitas.

John Foxe reported years after Taverner's death that he had regretted wasting his time with Catholic church music.

More about the history of Hampton Court here: it was Thomas Cardinal Wolsey's great palace before he turned it over to Henry VIII in 1527 after he fell from favour for failing to make the way clear for Henry VIII to marry Anne Boleyn. Before Anne's apartments at the Palace were finished, however, Henry had her executed: neither Wolsey nor Anne had much time to enjoy the pleasures of Hampton Palace.
Posted by Stephanie A. Mann at 12:30 AM