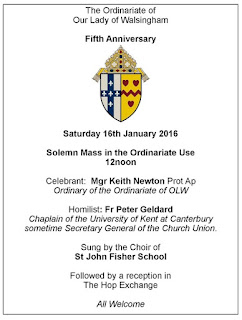 Four hundred and fifty-seven years ago, on January 15, 1559 Elizabeth Tudor was crowned and anointed Queen of England and Ireland in Westminster Abbey with a ceremony based on that developed for her half-sister Mary Tudor five years or so earlier. There are reports that she left the sanctuary area when the Bishop of Carlisle elevated the Sacred Host and that she did not receive Holy Communion. She was only 25 years old--after the succession of a boy king, too young (legally) to reign, and of a middle aged woman, perhaps too old to reign, her youth must have been very refreshing. Her subjects anticipated her marriage.

Her first Parliament would establish the Via Media of the Church of England while the Convocation of Bishops as constituted by the late Reginald Cardinal Pole, Archbishop of Canterbury, almost to the man, refused to swear the Oaths of Supremacy and Uniformity demanded by it. Elizabeth appointed Matthew Parker, who had been one of her mother's chaplains, as her Archbishop of Canterbury--she was, after all, Supreme Governor of the Church, as determined by Parliament. The bishops, priests and officials at the universities of Oxford and Cambridge who refused to take her oaths and follow his leadership would be deposed from their positions, exiled or imprisoned.

Five years ago today, the Personal Ordinariate of Our Lady of Walsingham was founded, and tomorrow the Ordinary of the Ordinariate will celebrate this extraordinary anniversary with Mass at the Church of the Most Precious Blood in London.

Late last year, the OLW (Our Lady of Walsingham) Ordinariate conducted a survey to discuss the next steps for the groups that had been formed since January 15, 2011, and noted:

As the project team (made up of three experienced Ordinariate priests and a member of the lay faithful with experience in strategic planning) visited groups, there was a real sense in which we became aware that we were walking on “holy ground.” Even in the smallest groups there was an excitement and joy as people told their stories of the past few years. In many places and in many different ways excellent work is being done. The sharing of treasure referred to in Anglicanorum Coetibus is happening as diocesan Catholics join the Ordinariate in worship and members of the Ordinariate join in the life of the wider Catholic community. Throughout our visits we experienced an appreciation and affection for the Ordinary but also a clear concern that he is overworked and under supported. Similarly, without exception, there was a clear sense that the groups were well cared for by their priests but a concern as to how supported their priests were. Most groups remain enthusiastic but there is also, inevitably, a little weariness and realisation that we have reached the stage where further development of the structures of the Ordinariate is necessary in order to share the vision of Pope Benedict XVI as we enter the next phase in our mission.
Posted by Stephanie A. Mann at 12:30 AM

Email ThisBlogThis!Share to TwitterShare to FacebookShare to Pinterest
Labels: anniversaries, Church of the Most Precious Blood, coronation, Elizabeth I, Fifth Anniversary, Our Lady of Walsingham Ordinariate