On Friday I noted that they had in common their status as national heroes: St. Joan for defending France against the English; St. John Paul for defending Poland against the Communists. One thing they do not have in common is how long it took for them to be canonized. 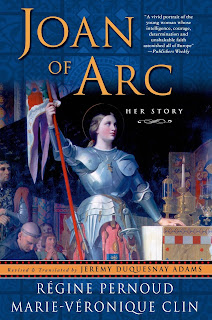 John Paul II died on April 2, 2005; at his funeral on April 6, there were cries of "Santo Subito"! [Make him a] saint soon! After his election, Pope Benedict XVI waived the five year waiting period before starting John Paul's cause in the diocese of Rome (not in Poland!). He was declared Venerable on December 19, 2007; beatified in Rome on May 1, 2011, and canonized on April 27, 2014: Nine (9) years after his death.

There's really no simple way to explain why it took more than 400 years for Joan of Arc to be declared a Saint by the Catholic Church: the path to canonization depends on the local diocese, the presence of a cult--Catholics asking for her to intercede for them, expressing devotion to her--and other factors (including money for research, travel, salaries, and experts). Joan gained a great champion in the mid nineteenth century, Félix Dupanloup, Bishop of Orléans from 1849 to 1878, who organized her cause, researched purported miracles, etc. Her spiritual popularity during World War I certainly hastened her cause in the early twentieth century.

Although the English had such a hand in trying her and bringing her to the stake, Joan of Arc (visionary) is on the Church of England Calendar of Saints on May 30. Please note that Joan was not canonized by the Catholic Church as a martyr, but as a confessor, as was Pope John Paul II. 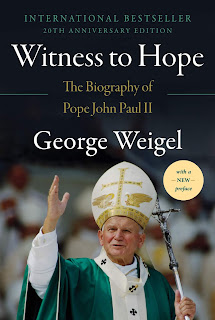 John Paul II had an admirable record as pope, cardinal-bishop, and priest, with a reputation for personal holiness, devotion to Jesus and the Blessed Virgin Mary. Joseph Cardinal Ratzinger even ended his homily at John Paul's funeral with a statement of certainty that he was in heaven, while still praying for his soul:

None of us can ever forget how in that last Easter Sunday of his life, the Holy Father, marked by suffering, came once more to the window of the Apostolic Palace and one last time gave his blessing “urbi et orbi.” We can be sure that our beloved Pope is standing today at the window of the Father’s house, that he sees us and blesses us. Yes, bless us, Holy Father. We entrust your dear soul to the Mother of God, your Mother, who guided you each day and who will guide you now to the eternal glory of her Son, our Lord Jesus Christ. Amen.

Those cries of "Santo Subito" in St. Peter's Square certainly hastened his cause!
Posted by Stephanie A. Mann at 12:00 AM