The Empress Eugenie and Lourdes 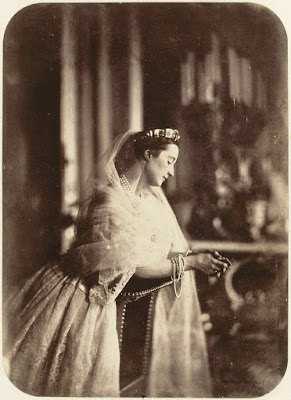 This morning on the Son Rise Morning Show, Anna Mitchell and I will talk about a fascinating aspect of the history of the apparitions of Our Lady at Lourdes, France. (7:50 a.m. Eastern/6:50 a.m. Central: Please listen live here; the podcast will be archived here!) Very appropriate for the feast of Our Lady of Lourdes!

The Empress Eugenie, the devout Catholic wife of Napoleon III, the last emperor of France, intervened at an important juncture in 1858. Their son, Louis Napoleon, the Prince Imperial, was ill and the Empress Eugenie sent his governess to Lourdes to bring back some water from the spring at the shrine.

Local authorities had barricaded the shrine and forbidden access, enforced by fines or imprisonment. When Madame Bruat, the Prince Imperial's governess, was arrested at the shrine, she paid the fines of all those threatened with prison terms because they couldn't pay the fines. She took the water back to Biarritz, the Emperor's vacation home, and Louis Napoleon recovered.

Fans of The Song of Bernadette, the 1943 movie based on Franz Werfel's 1941 novel, will remember how the Empress Eugenie, portrayed by Patricia Morison, persuades the Emperor Napoleon III to intervene and order the grotto opened to the faithful. He did so on October 5, 1858. More about that story here.

After the fall of the Second French Empire in 1870, the Napoleons left France for exile in Chislehurst, England. The former Emperor died in 1873, and their son died in 1879. Still a devout Catholic, Eugenie built a monastery with a crypt for the family tomb, St. Michael's Abbey, in Farnborough, Hampshire with definite French Connections:

In 1880, the Empress Eugénie bought a house in Farnborough. Crushed by the loss of her husband Napoleon III in 1873 and the death in 1879 of her 23 year old son in the Zulu War, she built St Michael’s Abbey as a monastery and the Imperial Mausoleum.

Dom Fernand Cabrol, the prior of the French Abbey of Saint Pierre de Solesmes, had dreamed of a monastic foundation dedicated to liturgical studies. No suitable property or funding had been found, though the vicissitudes of the anti-clerical France of the 1890s made the thought of a house abroad increasingly attractive. Finally, in 1895, the Empress Eugénie invited these French Benedictines to England, and thus the daily round of work, prayer and study began.

Monsignor Ronald Knox was received into the Catholic Church here. In his memoirs he described the Abbey as "a little corner of England which is forever France, irreclaimably French."

The last French monk died in 1956, so it's more England now, but maintains its ties to the Abbey of Saint Pierre de Solesmes with its Gregorian Chant, liturgical studies, and Mass in the Extraordinary Form of the Latin Rite.

The former Empress died in Spain on July 11, 1920--so 2020 is the centenary of her death--and was interred in the family crypt at St. Michael's Abbey.

More about the Empress Eugenie--she had also influenced her husband to send the French troops to Rome in defense of Pope Pius IX and had even offered him refuge in Avignon!--here.
Posted by Stephanie A. Mann at 12:00 AM