This Morning: 100th Anniversaries of Prohibition and Women's Suffrage 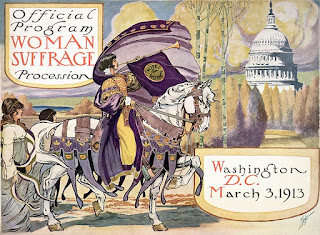 As I mentioned to Anna Mitchell when I sent her the link to the preview of the anniversaries of the 18th and 19th Amendments to the U.S. Constitution, we'll probably focus more on Prohibition than on Women's Suffrage this morning during our segment on the Son Rise Morning Show at about 6:50 a.m. Central/7:50 a.m. Eastern. Please listen live here; the podcast will be archived here!

I noted Friday in my preview that the Women's Suffrage movement was part of an overall Protestant reform agenda, which for a time included anti-slavery efforts, temperance and prohibition causes. While the Catholic Church--specifically the hierarchy in the United States--did not proclaim an official response to women's suffrage, some were opposed because of the anti-Catholic, eugenicist position of many in this pro-Protestant, pro-Anglo movement. Therefore, one on-line history of the long-term efforts to gain the vote for women states:

New England suffragists used the argument of “social housekeeping”—that women would clean up urban politics and social ills—to make a case for allowing women to vote in municipal elections. Frequently these campaigns for municipal suffrage drew on anti-immigrant and anti-Catholic bigotry. In Massachusetts, for example, anti-immigrant Republican men believed that native-born Protestant women would be more likely to vote than Catholic women, who would be discouraged from voting by their husbands. Thus, woman suffrage would save the state from “rum and Romanism” by diluting the Catholic vote and promoting the cause of temperance. Despite these appeals, the Republican Party as a whole did not support municipal suffrage for women. The Democratic Party, especially its Irish Catholic wing, which linked woman suffrage to nativism, temperance, and anti-family radicalism, also opposed enfranchising women.[13] (emphasis added)

So there's that linkage between women's suffrage, temperance, and anti-Catholicism.

The article that I cited on Friday, "Some Kind of Religious Freedom: National Prohibition and the Volstead Act' s exemption for the Religious Use of Wine" by Michael deHaven Newsom in Volume 70, Issue Three of the Brooklyn Law Review, notes that anti-Catholic, anti-immigrant (especially ant-Irish immigrant) view held sway throughout the history of the temperance and prohibition movements, and often in the history of the women's suffrage movement. Catholics were un-American and the only hope for American democracy and Protestant survival was for Catholics to assimilate and become Protestants. Lyman Beecher, the Presbyterian abolitionist and temperance promoter, whose son Henry Ward Beecher would also be a supporter of women's suffrage, was confident that Protestantism would triumph in this effort of assimilation:

Let the Catholics mingle with us as Americans and come with their children under the full action of our common schools and republican institutions, and the various powers of assimilation, and we are prepared cheerfully to abide the consequences. If in these circumstances the Protestant religion cannot stand before the Catholic, let it go down, and we will sound no alarm, and ask no aid, and make no complaint. It is no ecclesiastical quarrel to which we would call the attention of the American nation.

Lest anyone think that Beecher had somehow abandoned the cause of the Protestant Empire or had lost his faith in its anointed historical role, Beecher entertained no doubt but that if American Protestant political and religious leadership maintained a watchful eye by checking and regulating immigration, by instructing American Protestants as to the truth of Catholicism, by ensuring that the education of Protestant children never fell into the hands of Catholics, and by kindness and perseverance, that leadership would extend the light of evangelical Protestantism to Catholics, Protestantism would not "go down," but Catholicism would. (Newsom, p. 778)

As Newsom points out, Catholics did not want to assimilate and established the parochial school system and other programs and structures parallel to the (at that time) Protestant public school systems, etc. Newsom's article is detailed and long but well worth reading. He notes that the height of political anti-Catholicism came in the 1928 Presidential election, when Al Smith, the Catholic, Irish-American, Governor of New York ran as the Democrat Party candidate. Herbert Hoover was supported by the Prohibition movement and attacks against "rum and Romanism" focused on Smith's Catholicism.

While the 19th Amendment is still part of the U.S. Constitution, the 18th Amendment was repealed in 1933 by the 21st Amendment:

Section 1. The eighteenth article of amendment to the Constitution of the United States is hereby repealed.

Section 2. The transportation or importation into any State, Territory, or possession of the United States for delivery or use therein of intoxicating liquors, in violation of the laws thereof, is hereby prohibited.

Section 3. This article shall be inoperative unless it shall have been ratified as an amendment to the Constitution by conventions in the several States, as provided in the Constitution, within seven years from the date of the submission hereof to the States by the Congress.

The 21st Amendment took effect December 5, 1933 after state convention approval and passage of the Blaine Act in Congress.

Image Credit: Official program of the Woman Suffrage Parade of 1913.
Posted by Stephanie A. Mann at 12:00 AM