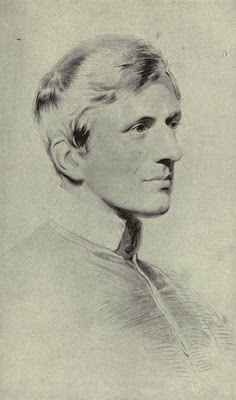 Just a reminder that I'll be on the Son Rise Morning Show this morning about 6:50 a.m. Central/7:50 a.m. Eastern to preview a Lenten series with Anna Mitchell. We'll talk about Newman's Anglican and Catholic sermons and describe the Augustine Institute selection of Lenten meditations drawn mostly from his Parochial and Plain Sermons (PPS) with a smattering of Catholic sermons.

The Tears of Christ starts out with passages from Newman's PPS for the Sixth Sunday of Lent, "The Cross of Christ the Measure of the World" (Volume 6, Sermon 7) for the meditations on both Ash Wednesday and today:

. . . It is the death of the Eternal Word of God made flesh, which is our great lesson how to think and how to speak of this world. His Cross has put its due value upon every thing which we see, upon all fortunes, all advantages, all ranks, all dignities, all pleasures; upon the lust of the flesh, and the lust of the eyes, and the pride of life. It has set a price upon the excitements, the rivalries, the hopes, the fears, the desires, the efforts, the triumphs of mortal man. It has given a meaning to the various, shifting course, the trials, the temptations, the sufferings, of his earthly state. It has brought together and made consistent all that seemed discordant and aimless. It has taught us how to live, how to use this world, what to expect, what to desire, what to hope. It is the tone into which all the strains of this world's music are ultimately to be resolved.

Look around, and see what the world presents of high and low. Go to the court of princes. See the treasure and skill of all nations brought together to honour a child of man. Observe the prostration of the many before the few. Consider the form and ceremonial, the pomp, the state, the circumstance; and the vainglory. Do you wish to know the worth of it all? look at the Cross of Christ.

Go to the political world: see nation jealous of nation, trade rivalling trade, armies and fleets matched against each other. Survey the various ranks of the community, its parties and their contests, the strivings of the ambitious, the intrigues of the crafty. What is the end of all this turmoil? the grave. What is the measure? the Cross.

Go, again, to the world of intellect and science: consider the wonderful discoveries which the human mind is making, the variety of arts to which its discoveries give rise, the all but miracles by which it shows its power; and next, the pride and confidence of reason, and the absorbing devotion of thought to transitory objects, which is the consequence. Would you form a right judgment of all this? look at the Cross.

Again: look at misery, look at poverty and destitution, look at oppression and captivity; go where food is scanty, and lodging unhealthy. Consider pain and suffering, diseases long or violent, all that is frightful and revolting. Would you know how to rate all these? gaze upon the Cross.

Thus in the Cross, and Him who hung upon it, all things meet; all things subserve it, all things need it. It is their centre and their interpretation. For He was lifted up upon it, that He might draw all men and all things unto Him. . . .

As the Carthusian motto states: Stat crux dum volvitur orbis (The cross stands while the world turns).
Posted by Stephanie A. Mann at 12:30 AM