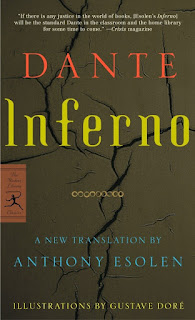 Every Thursday evening during Lent, I plan to attend the 5:30 p.m. Mass in the Extraordinary Form of the Latin Rite at Blessed Sacrament Catholic Church and then go study Dante's Divine Comedy at the Spiritual Life Center (SLC). The series, An Introduction to the Divine Comedy, begins on February 27, the Thursday after Ash Wednesday (next Thursday):

Join us as we travel with Dante on this Lenten journey through Hell, Purgatory, and Heaven as we seek to gain spiritual insights from the sinners and saints encountered along the way.

Written in the fourteenth century by Italian poet and philosopher Dante Alighieri, The Divine Comedy is arguably the greatest epic poem of all time—presenting Dante’s brilliant vision of the three realms of Christian afterlife: Inferno, Purgatory, and Paradise.

We will be using Professor Anthony Esolen’s translation of the Comedy, and will have copies available for sale.

I'll take my copies Dorothy L. Sayers' translation and see how it goes.

After a break for Holy Week, Easter and its Octave, I'll be back--Lord willing--at the SLC to attend the Catholic Culture Conference, with another program on Dante: 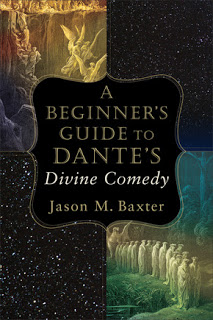 The Catholic Culture Conference is an opportunity for faithful Christians to come together for formation and fellowship. The program intends to promote Catholic values in personal and family life, as well as in society at large.

The theme for the 2020 Catholic Culture Conference is “Dante and the End of Men”. The title plays off the title of a 2010 article which appeared in The Atlantic magazine. In her article “The End of Men” author Hanna Rosin tells the story of a culture which once gave respect, and even deference, to the role of men. According to Rosin, though, times have changed, and modern culture no longer needs men. Women can now do everything that men used to do, which makes them “equal” to men in most every way, and even preferential to men in most things.

One reason for this shift has been a denigration of all things authentically masculine, and a lowering of expectations for men. A culture which fosters true masculinity will hold men accountable for their behavior, look to them for leadership in faith and morals, and be able to count on them as trustworthy providers and protectors.

Dr. Jason Baxter of Wyoming Catholic College will give three talks on the theme of “Dante and the End of Men”; one focusing on men in each of the three stages of Dante’s pilgrimage: Hell, Purgatory, and Heaven. For additional insights on Catholic masculinity, Bo Bonner of Mercy College will present talks on St. Joseph.

The Culture Conference is open to all. Join us for a weekend of study, discussion, and culture-building.


Professor Baxter was here in December of 2017 and made a presentation at Eighth Day Books before his book was published.
Posted by Stephanie A. Mann at 12:00 AM