Preview: "The Duty of Self-Denial" on the Son Rise Morning Show 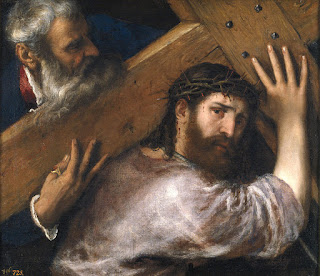 When we prepare for Lent, we think of what to give up and what to do to fulfill the Lenten mandates of fasting, praying, and almsgiving. Different voices suggest various strategies: give up sin; take on something else and don't focus on giving up; or a facetious idea like giving up brussel sprouts. Ascension Press lists 25 "weird" things to give up for Lent. We're told to make a link between what we give up and what we give in alms: if you stop buying a soft drink or carbonated beverage (pop, cola, soda, soda pop, or whatever you call it in your region of the USA), save the money you would have spent and donate it to the poor, etc.

But in his sermon "The Duty of Self-Denial", St. John Henry Newman offers a deeper reason for and a deeper meaning of self-denial: Some form of Self-Denial is just part of being a Christian:

SELF-DENIAL of some kind or other is involved, as is evident, in the very notion of renewal and holy obedience. To change our hearts is to learn to love things which we do not naturally love—to unlearn the love of this world; but this involves, of course, a thwarting of our natural wishes and tastes. To be righteous and obedient implies self-command; but to possess power we must have gained it; nor can we gain it without a vigorous struggle, a persevering warfare against ourselves. The very notion of being religious implies self-denial, because by nature we do not love religion.

Self-denial, then, is a subject never out of place in Christian teaching; still more appropriate is it at a time like this, when we have entered upon the forty days of Lent, the season of the year set apart for fasting and humiliation.

In a couple of paragraphs that are not included in the excerpt, Newman comments that this an obligation many Christians do not observe. Either their Christian profession is very weak and they are consumed by the trials and pleasures of the world, or even when they do "profess much love for religion" they don't think they need to work at their faith:

Such persons at best seem to say, that religious obedience is to follow as a matter of course, an easy work, or rather a necessary consequence, from having some strong urgent motive, or from some bright vision of the Truth acting on the mind; and thus they dismiss from their religion the notion of self-denial, or the effort and warfare of faith against our corrupt natural will, whether they actually own that they dismiss it or not. I say that they do this at best; for it often happens, as I just now intimated, that they actually avow their belief that faith is all-sufficient, and do not let their minds dwell at all on the necessity of works of righteousness. All this being considered, surely I am not wrong in saying that the notion of self-denial as a distinct religious duty, and, much more (as it may well be called), the essence of religious obedience, is not admitted into the minds of the generality of men.

Newman contends that this view of religion is wrong; it is wrong because Jesus tells us in the Gospels that being His disciple means that we must deny ourselves, take up our crosses, and follow Him:

Fasting is clearly a Christian duty, as our Saviour implies in His Sermon on the Mount. Now what is fasting but a refraining from what is lawful; not merely from what is sinful, but what is innocent?—from that bread which we might lawfully take and eat with thanksgiving, but which at certain times we do not take, in order to deny ourselves. Such is Christian self-denial,—not merely a mortification of what is sinful, but an abstinence even from God's blessings.

Again: consider the following declaration of our Saviour: He first tells us, "Strait is the gate, and narrow is the way which leadeth unto life, and few there be that find it." And again: "Strive to enter in, for many, I say unto you, will seek (only seek) to enter in, and shall not be able." Then He explains to us what this peculiar difficulty of a Christian's life consists in: "If any man come to Me, and hate not his father, and mother, and wife, and children, and brethren, and sisters, yes, and his own life also, he cannot be My disciple." [Matt. vii. 14. Luke xiii. 24; xiv. 26] Now whatever is precisely meant by this (which I will not here stop to inquire), so far is evident, that our Lord enjoins a certain refraining, not merely from sin, but from innocent comforts and enjoyments of this life, or a self-denial in things lawful.

As Newman says, in our self-denial, we imitate Christ by giving up things that are good in themselves for the sake of something better:

Again, He says, "If any man will come after Me, let him deny himself, and take up his cross daily, and follow Me." [Luke ix. 23.] Here He shows us from His own example what Christian self-denial is. It is taking on us a cross after His pattern, not a mere refraining from sin, for He had no sin, but a giving up what we might lawfully use. This was the peculiar character in which Christ came on earth. It was this spontaneous and exuberant self-denial which brought Him down. He who was one with God, took upon Him our nature, and suffered death—and why? to save us whom He needed not save. Thus He denied Himself, and took up His cross. This is the very aspect, in which God, as revealed in Scripture, is distinguished from that exhibition of His glory, which nature gives us: power, wisdom, love, mercy, long-suffering—these attributes, though far more fully and clearly displayed in Scripture than in nature, still are in their degree seen on the face of the visible creation; but self-denial, if it may be said, this incomprehensible attribute of Divine Providence, is disclosed to us only in Scripture. "God so loved the world that He gave His Son." [John iii. 16.] Here is self-denial. And the Son of God so loved us, that "though He was rich yet for our sakes He became poor." [2 Cor. viii. 9.] Here is our Saviour's self-denial. "He pleased not Himself." [Romans 15:3]

Newman cites the example of St. Paul's self-denial in imitation of Christ:

This is St. Paul's rule, as has already been referred to: accordingly, in another place, he bears witness of himself that he "died daily." Day by day he got more and more dead to this world; he had fewer ties to earth, a larger treasure in heaven. Nor let us think that it is over-difficult to imitate him, though we be not Apostles, nor are called to any extraordinary work, nor are enriched with any miraculous gifts: he would have all men like himself, and all may be like him, according to their place and measure of grace. If we would be followers of the great Apostle, first let us with him fix our eyes upon Christ our Saviour; consider the splendour and glory of His holiness, and try to love it.

We'll discuss this sermon as the first in our Lenten series on the Son Rise Morning Show Monday, March 2 at about 6:50 a.m. Central/7:50 a.m. Eastern. Please listen live here; the podcast will be archived here.

I'll continue the excerpts and analysis on Monday as Newman offers practical advice about self-denial and fasting beyond skipping treats between meals and abstaining from flesh meat.
Posted by Stephanie A. Mann at 12:00 AM