Preview: Papal Infallibility and the Siege of Paris: 150 Years Ago 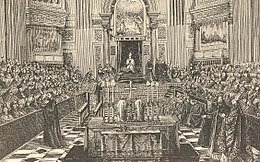 On Monday, February 10, we'll discuss two interconnected anniversaries on the Son Rise Morning Show: The dogmatic definition of Papal Infallibility at the First Vatican Council on July 18, 1870 and the Siege of Paris at the end of the Franco-Prussian War beginning on September 19, 1870.

The First Vatican Council was convened by Pope Pius IX (Blessed Pope Pius IX, whose feast is February 7) on December 8, 1869 (the feast of the Immaculate Conception, celebrating the dogma Pope Pius IX had declared in 1854 via the Papal Bull Ineffabilis Deus).

The purpose of the First Vatican Council was to clarify the Church's teaching about the Church itself. The bishops met, not in the Lateran Basilica like previous councils held in Rome, but in St. Peter's Basilica. As the bishops met in council, Pope Pius IX was already the "Prisoner of the Vatican", as Victor Emmanuel of Sardinia had conquered the Papal States. Troops from the French Empire, ruled by Louis Napoleon Bonaparte, Napoleon III, protected the Pope in Rome, which had not yet been taken by the Italian revolutionaries.

Although the First Vatican Council is most famous for the proclamation of Papal Infallibility, there was another document issued, Dei Filius, the Dogmatic Constitution on the Catholic Faith, on April 24, 1870. It has four chapters: 1. God, Creator of All Things; 2. Revelation; 3. Faith; 4. Faith and Reason. It begins (in translation):

The holy, Catholic, Apostolic, Roman Church believes and confesses that there is one, true, living God, Creator and Lord of heaven and earth, omnipotent, eternal, immense, incomprehensible, infinite in intellect and will, and in every perfection; who, although He is one, singular, altogether simple and unchangeable spiritual substance, must be proclaimed distinct in reality and essence from the world; most blessed in Himself and of Himself, and ineffably most high above all things which are or can be conceived outside Himself.

This sole true God by His goodness and "omnipotent power," not to increase His own beatitude, and not to add to, but to manifest His perfection by the blessings which He bestows on creatures, with most free volition, "immediately from the beginning of time fashioned each creature out of nothing, spiritual and corporeal, namely angelic and mundane; and then the human creation, common as it were, composed of both spirit and body" [Lateran Council IV, can. 2 and 5]

But God protects and governs by His providence all things which He created, "reaching from end to end mightily and ordering all things sweetly" [cf. Wis 8:1]. For "all things are naked and open to His eyes" [Heb 4:13], even those which by the free action of creatures are in the future.

The document on the nature of the Church, which included the role of the Papacy, faced more opposition and therefore, Pope Pius IX decided the bishops should define only the role of the Pope in that document, which became known by its first words, Pastor Aeternus, defining Papal Infallibility as one of its topics. Pastor Aeternus was finally adopted on July 18, 1870 with two dissenting votes. One of those dissenting votes was cast by the Bishop of Little Rock, Arkansas: Edward Fitzgerald, whose family had left Ireland during the Irish Potato Famine! He was concerned--as was St. John Henry Newman in England--that the declared definition of the doctrine would hamper his efforts to evangelize. Like Newman, he agreed that the Pope exercised magisterial infallibility in declaring dogma in certain limited occasions; he just thought the public definition was inopportune. The other dissenter was Aloisio Riccio of Sicily. Both accepted the doctrine after it had been declared.

With two documents completed, and after the bishops had been in Rome for seven months, the bishops were to return to their home dioceses for a summer break and then come back to the Vatican for further consultations, taking up the document on the nature of the Church, for example, on the role of the bishops. That's when the Franco-Prussian war intervened.

Prussian troops were advancing in France quickly, so Napoleon III had to recall the French troops garrisoned in Civitavecchia in August of 1870. When the French were defeated at the Battle of Sedan at the beginning of September that year, the new Kingdom of Italy invaded Rome and took over the city, removing it from Papal jurisdiction. On September 20, 1870, Pope Pius IX suspended the First Vatican Council indefinitely. It was formally closed in 1960, before the Second Vatican Council convened. 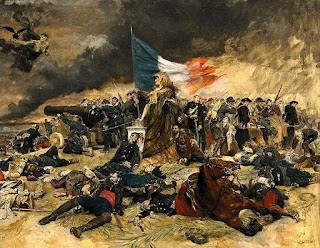 So while the unification of Italy proceeded apace, so did the Franco-Prussian War, and the French were losing. Just as the Kingdom of Italy needed to take Rome to be unified, the Prussian-German nation needed to take Paris to be victorious. Thus, the Siege of Paris beginning on September 19, 1870.

More about that Monday!!
Posted by Stephanie A. Mann at 12:00 AM